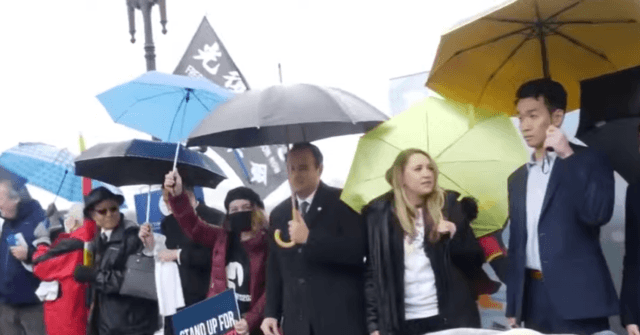 Victims of Communism Memorial Foundation is hosting a #NoBeijing2022 rally on the U.S. Capitol lawn Thursday to protest the Beijing 2022 Olympic Games.

“Human rights allies will call out the International Olympic Committee for awarding the 2022 Winter Games to Beijing despite evidence of China’s ongoing human rights abuses, for failing to fulfill its human rights obligations, and for refusing to engage substantively with human rights organizations regarding forced labour in the Uyghur Region. The top corporate sponsors of the Games – Airbnb, Alibaba, Allianz, Atos, Bridgestone, Coca-Cola, Intel, Omega, Panasonic, P&G, Samsung, Toyota, and Visa – will also be called out for failing to fulfill their human rights due diligence responsibilities and urged to immediately disclose their human rights due diligence strategies or explain their failure to carry out such assessments,” states an event information page.

“Both the IOC and the corporate sponsors will also be challenged to protect athletes from the “certain punishment” that the Beijing Organizing Committee has threatened against those who may make statements protesting the Chinese government’s abuse of human rights,” the event description continues.

The following individuals are expected to deliver remarks:

Multiple nations and human rights investigators have concluded that China is guilty of genocide against the Uyghur people and other minorities in East Turkistan. The Chinese Communist Party is also guilty of ethnic cleansing policies in Tibet and Inner Mongolia and a host of human rights atrocities against people of faith and political dissidents. Opponents of the Winter Olympics say honoring Beijing with hosting duties sends China a message that the world approves of these crimes.