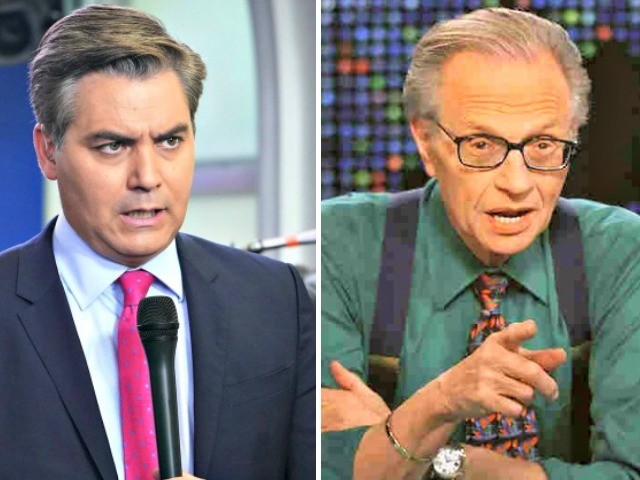 KING: Two things, Rick — the internet and cable news. Could you imagine cable news in Watergate? And they don’t do news anymore. In fact, RT is one of the few channels doing news. RT does news. CNN stopped doing news a long time ago. They do Trump. Fox is Trump TV and MSNBC is anti-Trump all the time. You don’t see a story — there was vicious winds and storms in the Northeast the other day – not covered on any of the three cable networks, not covered. Not covered! So when CNN started covering Trump — they were the first — they covered every speech he made and then they made Trump the story. So, Trump is the story in America. I would bet that ninety-eight percent of all Americans mention his name at least once a day. And when it’s come to that, when you focus on one man, I know Donald 40 years — I know the good side of Donald and I know the bad side of Donald — I think he would like to be a dictator. I think he would love to be able to just run things. So, he causes a lot of this. Then his fight with the media and fake news. I’ve been in the media a long time, like you — longer than you, Rick. And at all my years at CNN, in my years at Mutual Radio, I have never seen a conversation where a producer said to a host “pitch the story this way. Angle it that way. Don’t tell the truth.” Never saw it. Never saw it.

SANCHEZ: You know it’s funny, just quick because you know these producers are telling me you guys have to start wrapping this up … you said something interesting about how CNN played along with Trump. I think they only played along or at least gave him that much airtime in many ways because they didn’t think he was going to win, correct?

KING: I guess it’s to their regret. But, they covered him as a character. They carried every speech he made. They carried him more than Fox News, at the beginning. And so they built the whole thing up and the Republicans had a lot of candidates and they all had weaknesses. When I saw Senator Cruz hug Donald Trump the other day I said, “this is what America has become.” He said that Cruz’s father helped kill Kennedy!