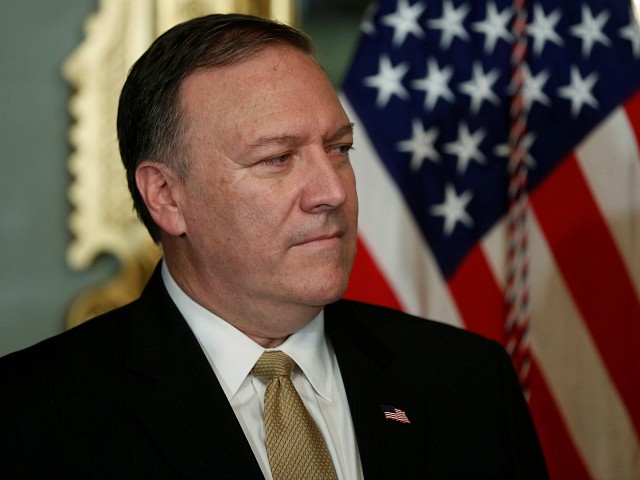 Pompeo spoke to Guaidó on the phone this week prior to the celebration of July 5 in Venezuela and July 4, American Independence Day, in the United States.

Pompeo’s message was published on the same day that United Nations High Commissioner for Human Rights Michelle Bachelet delivered a speech before her commission condemning Maduro for gross human rights violations against his people. Bachelet visited Venezuela last month and met with both Maduro, who illegally controls the Venezuelan military and presidential palace, and Guaidó, the legitimate head of statement.

Maduro’s regime has refuted Bachelet’s findings and demanded an apology.

“Once again, the Venezuelan people are besieged by dictatorship, undesired foreign presence, and profiteers,” Pompeo said in remarks published by the State Department on Friday. “As in the time of [Venezuelan liberator Simón] Bolívar, Venezuela’s path to democracy is not easy, but you inspire the world with the strength of your voices and tremendous courage. We are with you in your struggle to reclaim your democratic self-governance and free it from those who have betrayed, oppressed, and robbed the Venezuelan people of the wealth of your great nation.”

Pompeo promised that Washington would be “unwavering in [its] commitment to realizing the restoration of your democratic future and the establishment of a government chosen by the Venezuelan people through free and fair elections.”

“You will have our support until then — and beyond as your recovery begins,” he vowed.

U.S. National Security Advisor John Bolton also extended his support to the Venezuelan people on Friday, stating that the Trump administration is “proud” to stand with Guaidó against Maduro.

US is proud to be supporting Interim President Guaido & the democratically elected National Assembly, which is courageously working to free Venezuela of a ruthless dictator responsible for Venezuela suffering the single largest economic collapse outside of war in at least 45 yrs.

Pompeo spoke to Guaidó on Tuesday. According to State Department spokesperson Morgan Ortagus, Pompeo used the occasion “to commemorate the anniversary of Venezuela’s independence on July 5th and express the United States’ unwavering support for Guaido, the National Assembly, and the Venezuelan people as they seek to regain their country’s freedom and prosperity.”

Guaidó issued his own Independence Day message on Thursday.

“We congratulate the U.S. on its Independence Day. Today, [July 4], the American people celebrate their freedom. This same freedom is what the Venezuelan people conquered over 200 years ago and we will recover it,” Guaidó wrote on Twitter.

In addition to verbal support, the Treasury Department took new measures this week to help keep money out of Maduro’s pocket, to prevent the socialist regime from being able to afford the weapons they need to torture and kill dissidents, which keeps them in power. On Wednesday, the U.S. Treasury designated Cubametales, the Cuban state-run oil company, for its ties to Venezuela and its work in keeping Maduro’s regime afloat amid sanctions on most of its industries. The designation blocks any property or interests the company has in the United States and ban Americans and American companies from doing business with Cubametales.

“Maduro is clinging to Cuba to stay in power, buying military and intelligence operatives in exchange for oil. Treasury’s sanctions on Cubametales will disrupt Maduro’s attempts to use Venezuela’s oil as a bargaining tool to help his supporters purchase protection from Cuba and other malign foreign actors,” Treasury Secretary Steven Mnuchin explained on Wednesday.

While America spearheads the international effort against Maduro, the U.N.’s human rights chief delivered a speech Friday to the Human Rights Council, which the Maduro regime belonged to until late 2018 (Maduro’s patron state, Cuba, is a member of the council). Bachelet, having returned recently from Caracas, found Venezuela is a dire state.

“Essential institutions and the rule of law in Venezuela have been profoundly eroded. The exercise of freedom of opinion, expression, association and assembly, and the right to participate in public life, entail a risk of reprisals and repression,” Bachelet told the council. “Our report notes attacks against actual or perceived opponents and human rights defenders, ranging from threats and smear campaigns to arbitrary detention, torture and ill-treatment, sexual violence, and killings and enforced disappearance.”

Bachelet added that her team ad “documented excessive use of force in the context of security operations by the Special Action Forces, with multiple killings, mainly of young men.” She noted that inflation in the country had “reached a dramatic 2,866,670 percent at the end of January 2019 – 2.8 million percent.”

“An assessment of humanitarian needs conducted by OCHA in March found that an estimated seven million people in Venezuela need humanitarian assistance: one quarter of the population,” she insisted.

The U.N. report on Venezuela, whose debut coincides with Bachelet’s address, is the result of hundreds of interviews with Venezuelan officials, members of the Maduro dictatorship, and Venezuelan civilians. It recommends immediate action to contain the problem but stops short of demanding a military overthrow of the Maduro regime, despite it not being legally in power.

The Maduro regime responded with a statement demanding an immediate “correction” of the report that would remove the references to the ongoing humanitarian crisis in the country and detail the alleged successes of socialism.

“We demand the correction of [the report’s] content and insist on thoughtful and respectful action from your office,” Maduro’s Vice Minister for International Communication William Castillo said, according to Maduro state media. The report, Castillo claimed, “ignores almost completely the information provided by the State [the Maduro regime] and only takes into account that obtained by spokesmen of the opposition and media sources.”

Castillo demanded that the report condemn the United States’ “multifaceted aggression” against Venezuela for the humanitarian disaster in the country, but also insisted that no such disaster exists.

“Castillo dismissed the notion that a ‘humanitarian crisis’ exists in the country, as the economic problems that Venezuela endures, like those of many nations, are associated with different factors,” Maduro media reported. Castillo also reported claimed that Maduro faces “serious risks to national security, plans for coups d’etat that offer a bloodbath among the civilian population, and even foreign military intervention, which President Trump has threatened us with.”