Two transgender swimmers blew away the competition Wednesday at the Ivy League Women’s Swimming Championships by posting the fastest times in the 800-yard freestyle relay.

Lia Thomas has been the focus of controversy for the entire University of Pennsylvania swimming season for being biologically male but competing as a woman and posting times that have shattered women’s swimming records. And on Wednesday, Thomas added to that controversial record by posting the fastest time of the meet with a 1:44:50 in the first leg of the race, according to the Daily Mail. 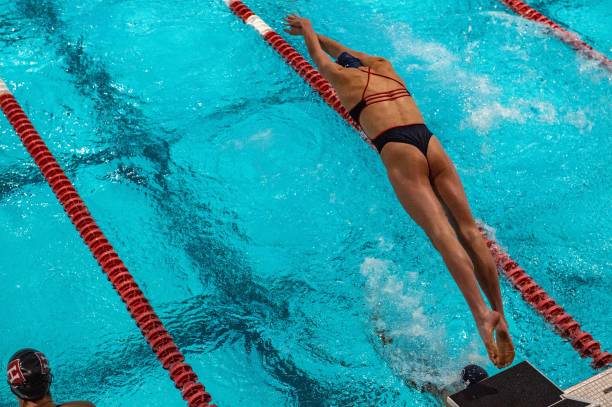 Lia Thomas, a transgender woman, dives into the water to swim in the 200 yard Medley Relay for the University of Pennsylvania at an Ivy League swim meet against Harvard University in Cambridge, Massachusetts, on January 22, 2022. (Photo by JOSEPH PREZIOSO/AFP via Getty Images)

The second transgender swimmer to top the meet was Iszac Henig, a Yale women’s swim team member who was born female but identifies as a male even while still competing on the Yale women’s team. Henig posted the next fastest time at 1:44:65.

While the two trans swimmers achieved the fastest times as individuals in the relay, Harvard University won that race with Yale second and UPenn third.

Still, the controversy has only deepened, with Thomas once again eclipsing all comers and beating Henig. In January, Thomas faced Henig during the regular season and lost in a head-to-head race. But one of Thomas’ teammates alleged that Thomas threw the race to Henig as a ruse to throw off the year-long complaints against the unfairness to natural-born women that Thomas represented. 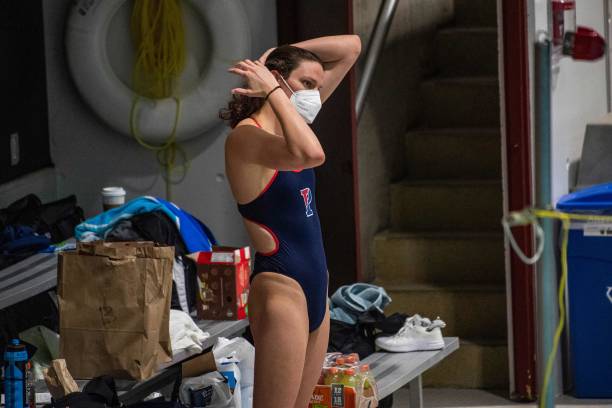 Lia Thomas, a transgender woman, ties her hair back before putting a swim cap on and swimming for the University of Pennsylvania at an Ivy League meet against Harvard University in Cambridge, Massachusetts, on January 22, 2022. (Photo by JOSEPH PREZIOSO/AFP via Getty Images)

In January, a swimmer who wanted to remain anonymous for fear of having her life destroyed by leftists said that she felt that Thomas and Henig conspired to have Thomas lose the race.

“Looking at [Lia’s] time, I don’t think she was trying,” the Penn swimmer told OutKick. “I know they’re friends, and I know they were talking before the meet. I think she let her win to prove the point that, ‘Oh see, a female-to-male beat me.’”

“I can’t say for sure, but I wouldn’t be shocked if I found out that was 100% true,” the teammate added.

The fact that Thomas convincingly beat Henig on Wednesday only tends to bolster the accusation of conspiracy earlier in the year. 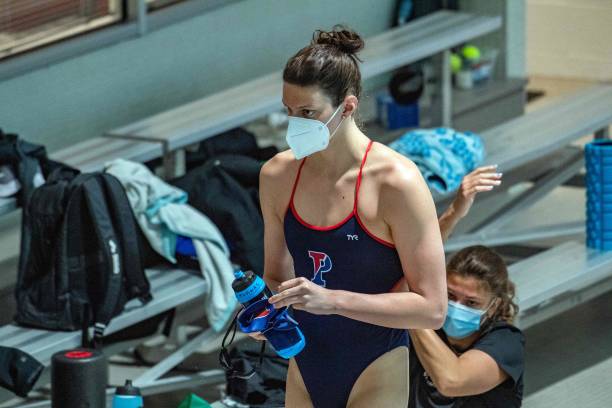 Lia Thomas, a transgender woman, walks to the pool to swim for the University of Pennsylvania at an Ivy League meet against Harvard University in Cambridge, Massachusetts, on January 22, 2022. (Photo by JOSEPH PREZIOSO/AFP via Getty Images)

By February 16, UPenn female swimmers had signed a letter saying that trans swimmers like Thomas should be banned from women’s competition because Thomas is still a biological male, making it impossible for natural-born females to win.

Despite the mountain of complaints — and not just from the UPenn team — the Ivy League ignored the criticism and allowed Thomas to compete in the championships, anyway.