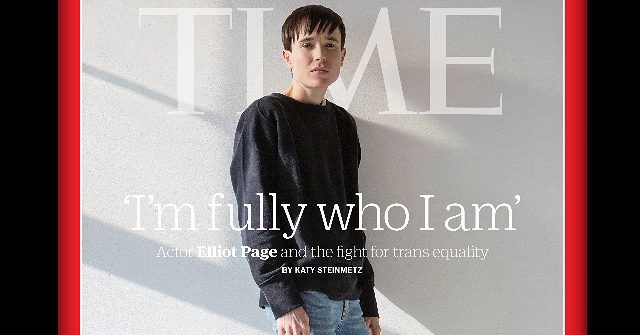 X-Men and Juno star Elliot Page recalled in an extensive TIME interview wanting to “be a boy” by the age of nine and opened up about coming out as transgender and having a “lifesaving” double mastectomy.

“I felt like a boy. I wanted to be a boy. I would ask my mom if I could be someday,” Page said in the interview with TIME, revealing wanting short hair by around age nine. Page later made a “compromise” by growing longer hair again, after landing an acting role as a daughter in a Canadian mining family in the TV movie Pit Pony.

“I became a professional actor at the age of 10. Of course I had to look a certain way,” Page said. The Inception star described being a famous actor, and how the endless red carpet events and magazine spreads were “agonizing reminders” that the image Page saw in the mirror didn’t look like the one the world saw. “I just never recognized myself. For a long time I could not even look at a photo of myself.”

Page made international news last year, coming out as transgender. Page’s preferred pronouns are “he/him” and “they/them,” and Page now identifies as “non-binary.”

“With deep respect for those who came before me, gratitude for those who have supported me & great concern for the generation of trans youth we must all protect, please join me and decry anti-trans legislation, hate & discrimination in all its forms,” Page said on Tuesday.

“What I was anticipating was a lot of support and love and a massive amount of hatred and transphobia. That’s essentially what happened,” Page said of coming out as transgender. “My privilege has allowed me to have resources to get through and to be where I am today. And of course, I want to use that privilege and platform to help in the ways I can.”

Page also says that coming out as trans was “selfish” on one level, stating, “it’s for me. I want to live and be who I am.” The actor also opened up about having both breasts surgically removed,  which was “not only life-changing, but lifesaving. It has completely transformed my life.”

Page has spent years pushing leftist politics, warning in 2019 that global warming and “environmental racism” would end the world in a decade.