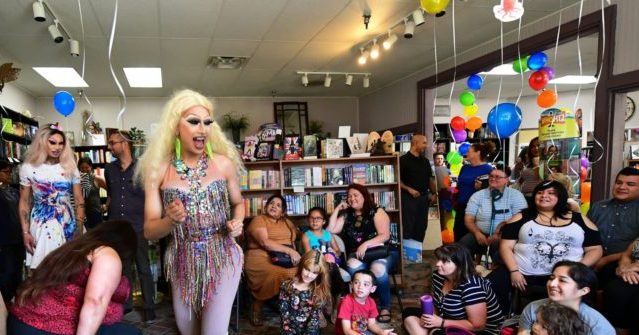 The Daily Mail provided a video of Bell’s comments to the school board:

Bell addressed the Austin-area Lake Travis Independent School District (ISD) Board Wednesday, quoting from the book Out of Darkness by Ashley Hope Perez.

“Take her out back, we boys figured, then hands on the titties,” Bell read from the book.

According to KXAN, the following day the school district confirmed it pulled the book from the middle school libraries:

“Lake Travis ISD received a call (unidentified) that there was material of a pornographic nature in our Hudson Bend Middle School library,” read an initial statement from the district.

After that statement, a district spokesperson told us the book was removed from Hudson Bend and Bee Cave Middle Schools. Its contents will be reviewed with respect to board policy.

“A district possesses significant discretion to determine the content of its school libraries,” the spokesperson reportedly stated, elaborating:

A district must, however, exercise its discretion in a manner consistent with the First Amendment.

A district shall not remove materials from a library for the purpose of denying students access to ideas with which the district disagrees. A district may remove materials, because they are pervasively vulgar or based solely upon the educational suitability of the books in question.

NBC News headlined its interview with the book’s author in September 2015, with the words “Ashley Hope Perez’s ‘Out of Darkness’: Young Love Amid Racism, Segregation.”

The news story described the book as having been set “against the backdrop of a horrific 1937 explosion in East Texas which killed nearly 300 schoolchildren and teachers.”

NBC News said the book “stares unflinchingly at racism, classism, segregation, and the people who live on the margins of society.”

“From this dark, bleak horizon emerges a star-cross love story crossing color lines, between an African American boy and a Mexican American girl,” the report stated.

Perez responded to a question about what prompted her to write the book:

I wanted to do something different. And I thought, what if I write a historical novel that would be compelling to my students. What’s the novel they wouldn’t be able to put down? I wanted to write a book that would lead them to say, “Here’s an experience I can relate to, even though it takes place in the past.”

“Central Texas is one among many areas in the country that have become hotspots for these eruptions of local anger and disagreement,” Jonathan Friedman of Pen America, a group that says it “stands at the intersection of literature and human rights to protect free expression in the United States and worldwide,” told KXAN.

“I think to pretend books that deal explicitly with sex or sexual assault are in some way a threat to young people are doing them a disservice,” he added. “This is about having access for young people to a wide variety of literature that people from different backgrounds are reflected in.”

“You have a small contingent in many cases of parents who decide that they disagree, and that they must know better than those who are in the classroom,” he said.

Gr 9 Up—This book presents a range of human nature, from kindness and love to acts of racial and sexual violence. The work resonates with fear, hope, love, and the importance of memory. The author’s note and acknowledgements pages give more background on the disaster. VERDICT Set against the backdrop of an actual historical event, Pérez’s young adult novel gives voice to many long-omitted facets of U.S. history.—Ruth Quiroa, National Louis University, IL

According to KXAN, the school district said it is not clear how long a review of the book will take before it makes a decision.