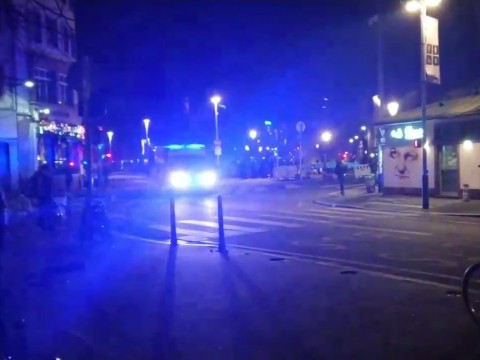 One was killed and three injured in a shooting in the vicinity of the Christmas Market in the historic French city of Strasbourg Tuesday evening.

A “major public safety event” was underway Tuesday evening, according to the French ministry of the interior, after shots were fired in Strasbourg, the French city which serves as one of the two homes of the European Parliament. The ministry instructed local residents to stay in their homes.

Franceinfo reports the number of injured has risen to ten, and a knife, as well as a firearm, was involved in the attack according to cited sources “close to the investigation”. Police have now identified the shooter but not made that information public.

As reported by employees live tweeting the shooting from within the European Parliament in Strasbourg, the assailant is still at large France’s Le Figaro now reports. The newspaper also claims the number of people injured in the shooting has now risen to six.

Reports circulating on social media that there has been more than one fatality in Strasbourg and even multiple shooters have not been confirmed by French authorities, or even reported in the French press.

Read the original story below

No further details including the status of the shooter have been yet released by authorities.

The French fire brigade confirmed that one had been killed in the shooting, which Le Figaro reports may have involved an automatic weapon, with early reports conflicting over how many were injured, with claims in french media ranging from three to nine.

The shooting took place by the Place Keber square, by the city’s annual Christmas market.

European Parliament has activated emergency protocol. We are currently in lockdown to safeguard people here. Stay safe and inside. #Strasbourg #Terrorism https://t.co/WcOYqx11X4

British state broadcaster the BBC cites a local journalist who reported a dozen shots having been fired.

Unverified videos uploaded to the Twitter microblogging platform showed residents running and screaming in fear, and injured people lying on the city pavements.

Several staff members of the European Parliament in the city have also taken to Twitter to describe the scene, with press officer Emmanuel Foulon reporting to have heard “the sound of shots”, and to have been told by security that the shooter is still at large.