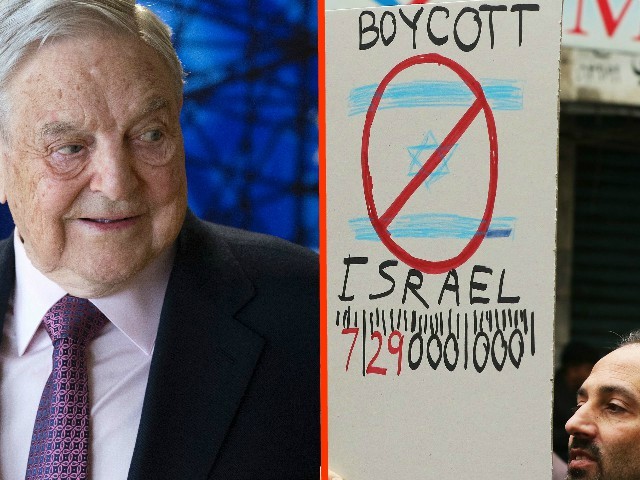 TEL AVIV — Amnesty International, a British-based NGO that has received financing from billionaire activist George Soros, has advocated the boycott of tourism in West Bank Israeli communities as well as eastern Jerusalem.

Using the disputed label of “Occupied Palestinian Territories,” Amnesty International singled out Airbnb, Booking.com, Expedia and TripAdvisor, claiming those companies are profiting from what the organization wildly claimed werer “war crimes” by facilitating tourism to those territories.

All four companies claim to operate under high ethical values and respect for the rule of law. However, none of these standards appears to influence the companies’ decisions in relation to settlement listings. In doing business with settlements, all four companies are contributing to, and profiting from, the maintenance, development and expansion of illegal settlements, which amount to war crimes under international criminal law.

Amnesty International, which has been funded by Soros’s Open Society Foundations, refers to the West Bank, areas where Jews have had an historic presence for thousands of years, as “Occupied Palestinian Territories,” implying that Israel stole the land from the Palestinians.

The organization’s report says that it included “East Jerusalem” in its definition of “Occupied Palestinian Territories” to be boycotted by the tourism companies. “East Jerusalem” is not a city. The term refers to eastern Jerusalem, which contains the Temple Mount, Western Wall and Old City and has been home to Jews as well as local Arabs for centuries.

Israel opposes the “occupied” label, and has referred to the West Bank in international forums as disputed. The framework for all previous peace proposals, each of which was rejected by the Palestinian Authority, never called for an entire Israeli evacuation from the West Bank or eastern Jerusalem.

The 1967 Six Day War was launched after Arab countries used the territories to stage attacks against the Jewish state. In 1988, Jordan officially renounced its claims to the West Bank and eastern Jerusalem and unilaterally recognized terrorist Yasser Arafat’s Palestine Liberation Organization as “the sole legitimate representative of the Palestinian people.”

Like eastern Jerusalem, the West Bank contains historic Jewish communities and some of the holiest sites in Judaism, including the Tomb of the Patriarchs and Matriarchs in Hebron, Rachel’s Tomb in Bethlehem, and Joseph’s Tomb in Shechem.

Amnesty International singled out Airbnb even though the housing giant already announced that the company will ban Israeli homes in the West Bank from its listings.

Airbnb made that announcement in November just 24-hours before a report from Human Rights Watch was reportedly set to criticize the company for allowing the listings.  Like Amnesty International, Human Rights Watch also received Soros financing.

Amnesty wrote that TripAdvisor “is the main focus of this campaign because of the company’s relative importance to the tourism industry in Israeli settlements.”

Last week, Breitbart News published an investigation finding that financing tied to Soros is a common yet largely under-reported theme among organizations that lead or support the anti-Semitic BDS campaign attempting to delegitimize the Jewish state.

In January, Israel released a list of 20 BDS-supporting organizations whose members will be banned from entering Israel due to their BDS activism, prominently featuring six American groups. At least four of the six BDS-promoting U.S. groups receive funding tied to Soros. Scores of other U.S. organizations that support the BDS movement are financed by Soros.

The American Friends Service Committee (AFSC) is a central proponent of anti-Israel BDS activism on college campuses and in churches, boasting a mission that exclaims active support for “boycott and divestment campaigns that target companies complicit in the occupation.”

AFSC has been financed by Soros’s Open Society Foundations as well as the Soros-funded Tides Foundation.

Tides is a central funding hub that distributes donor funds to far-left organizations. Indeed, Tides is one of the nation’s biggest funders of progressive organizations.

AFSC helped lead the campaign demanding divestment from Hewlett Packard and Sodastream due to the companies’ Israel branches.

AFSC works hand in hand with Students for Justice in Palestine (SJP), which is notorious for its anti-Israel crusade on college campuses, where the group peddles the BDS movement. AFSC and SJP are both featured on Israel’s list of six banned U.S.-based BDS-promoting organizations.

Palestine Legal’s website advertises that it is a “fiscally sponsored project of the Tides Center.” The Tides Center is a subsidiary entity of the Soros-funded Tides Foundation.

Students for Justice in Palestine, meanwhile, regularly partners with the BDS-supporting, radical Jewish Voice for Peace (JVP), another group banned in Israel over its BDS activities. JVP does not disclose most of its donors, but it has reportedly been funded by the Soros-financed Tides Foundation.

Also banned from entering Israel over BDS activism is the radical CODEPINK organization, which has been financed by the Soros-funded Tides Foundation and is well known for its disruptive protest antics.

Aside from organizations whose principal mission centers on BDS, scores of other major Soros-financed organizations form the nexus of so-called progressive groups that support BDS in the U.S.

Soros reportedly gave some $246 million to partners of the Women’s March. Indeed, as Breitbart News reported, many of the March “partners” are financed by Soros, including: Sierra Club, Amnesty International, MoveOn.org, NAACP, Green For All, Center for Constitutional Rights, Human Rights Watch, MoveOn.org, NARAL Pro-Choice, People for the American Way and Planned Parenthood.

Meanwhile, the Soros-funded Black Lives Matter has also participated in pro-BDS activism. When it released its wide-ranging, socialist-style platform in 2016, Black Lives Matter officially endorsed BDS and pledged to “fight the expanding number of anti-BDS bills being passed in states around the country.”

During the latest gubernatorial race in Florida, Democratic candidate Andrew Gillum came under fire for his deep ties to Dream Defenders, a radical group that is active in promoting BDS. Breitbart News reported that Dream Defenders organized a flash mob in Israel to officially endorse the BDS movement against the Jewish state. Dream Defenders founder Phillip Agnew is a graduate of the youth training program at the George Soros-financed People for the American Way, a program led at the time of Agnew’s attendance by Gillum himself.

In Israel, one group that has faced controversy over its BDS stance is the New Israel Fund (NIF), which finances scores of organizations critical of Israeli policy. Hacked emails document Soros’ Open Society Foundations provided the NIF with at least $837,500 from 2002 to 2015. Breitbart News further found that NIF’s 2015 annual report lists the Soros-funded Tides Foundation as a donor.

On its website, NIF explains that it “does oppose the global (or general) BDS movement,” but supports groups “that lawfully discourage the purchase of goods or use of services from settlements.” In other words, NIF supports BDS activities that target Israeli settlements.

In his few public comments on the matter, Soros himself has made clear he is not a supporter of the Jewish state.

The billionaire set the tone for his personal Israel views when he told the New Yorker’s Connie Bruck as part of a 1995 profile: “I don’t deny the Jews their right to a national existence — but I don’t want to be part of it.”

In February 2011, Soros penned a rare oped in the Washington Post in which the billionaire activist advocated support for the so-called Arab Spring in which scores of Muslim Brotherhood-allied groups stood to gain, including in Egypt with the downfall of the pro-U.S. regime of Hosni Mubarak. Soros singled out Israel as “the main stumbling block” against the insurgencies across the Middle East.

The main stumbling block is Israel. In reality, Israel has as much to gain from the spread of democracy in the Middle East as the United States has. But Israel is unlikely to recognize its own best interests because the change is too sudden and carries too many risks.

Soros celebrated that the American Israel Public Affairs Committee, the bipartisan pro-Israel group, “is no longer monolithic or the sole representative of the Jewish community.”

Indeed, AIPAC’s role in the political arena has been challenged by the Soros-funded J Street, which has taken controversial lines critical of Israeli policy and supports the Obama-led international nuclear accord with Iran that is strongly opposed by Prime Minister Benjamin Netanyahu’s government.