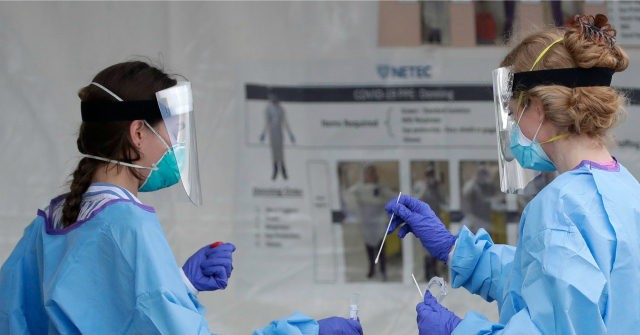 The massive protests over the death of George Floyd across the United States, which have devolved into rioting and looting mostly at night, cast doubt on the partial reopening of several non-essential businesses in cities plagued by the unrest as of Tuesday.

Moreover, coronavirus testing sites have shut down in at least four states — Pennsylvania, Florida, California, and Illinois, over the violent protests, “limiting cities’ ability to track the virus just as thousands of people participate in crowded demonstrations across the country,” Politico reported Monday.

Tens of thousands of people have taken to the streets in cities across America, with many rioting and looting at night, to express anger over the death of George Floyd, a black man, at the hands of the Minneapolis police. Two independent autopsies have deemed Floyd’s death a homicide. Now-fired white police officer Derek Chauvin kneed Floyd’s neck for several minutes.

The mass gatherings in dozens of cities have prompted fears by government leaders and health experts of a spike in cases of COVID-19, the disease caused by the virus, which has disproportionally plagued minority populations.

Many of the demonstrators have disregarded coronavirus mitigation policies imposed by local and state governments, particularly social distancing.

The delayed reopenings could intensify the coronavirus negative impact on the economy, including the job market for minorities.

In the nation’s capital on Monday, Mayor Muriel Bowser said the city is “very concerned” about the potential for a COVID-19 spike in the wake of several days of massive protests and riots, the local Fox 5 News reported.

The mayor has scheduled D.C. to continue its phased reopening of non-essential businesses this week after starting the process last Friday, May 29.

District officials have been relying on the community spread metric to make reopening decisions.

While the city has excluded COVID-19 ­cases at confined facilities when calculating the community spread of the virus, Dr. LaQuandra Nesbitt, the city’s top public health official, said the city would take cases from the mass gatherings into account, the Washington Post revealed.

As we ramp up our contact tracing, we will try as best as we can to link their exposure to having participated in one of these events, but it could be tricky to do so. If people are going to work, if they are going to dine in at the outdoor restaurants and we do a complete interview of all the activities that they participated in, we may be able to link their activity or participation to one of these protests.

D.C. officials said Monday they would announce the criteria for lifting the additional restrictions on non-essential businesses later in the week.

On Sunday, the Seattle Times reported that in that city, there is “fear the weekend’s destruction could make recovery even more difficult for businesses already wounded by the pandemic shutdown.”

“This isn’t going to make that any easier,” Jon Scholes, CEO of the Downtown Seattle Association, told the Seattle Times. “It’s something we’ve just never seen in downtown Seattle.”

In California, some businesses are also considering postponing the reopening over the demonstrations.

However, store owners received an urgent alert by the Alameda Business District, warning them to “consider boarding up their storefronts,” ABC 7 News reported on Tuesday.

Other regions in California are also delaying the reopening until further notice.

South Coast Plaza in Costa Mesa has postponed its planned reopening following the significant protests, violent clashes between demonstrators and police, and looting that have rocked Southern California in recent days.

The upscale mall had planned to throw open its doors for customers Monday following a lengthy coronavirus-related closure but, in an online message, officials said the reopening would be delayed to an unannounced date.

On Monday, CNBC pointed out that the demonstrations might derail Nevada’s scheduled reopening of casinos on Thursday.

“Las Vegas is getting ready to launch a ‘Welcome Back’ ad campaign to encourage visitors to come. But now guests will have to weigh not only the risks of coronavirus but also of civil unrest,” the news outlet noted.

“The current circumstances are tragic and negative for any business that requires physical access — certainly casinos would be included,” David Katz, a gaming industry analyst at Jeffries, told CNBC.

The protests turned riots may also impact the planned reopening of casinos in Missouri, the news outlet added.

In places like Chicago, where Mayor Lori Lightfoot (D) said the city would move forward with its third-phase reopening plans for Wednesday despite the protests and rioting, businesses may not be ready to reopen their doors.

I’m concerned about businesses all over the city who were preparing and saw the additional resources that they were putting in to opening up their businesses, community groups that were ready to start fully engaging with them. For many of those people, those resources and efforts were reduced to kindling or went down in flames.

Minnesota Tim Walz (D) declared on Saturday that a spike in coronavirus cases is “inevitable” after the protests and riots.