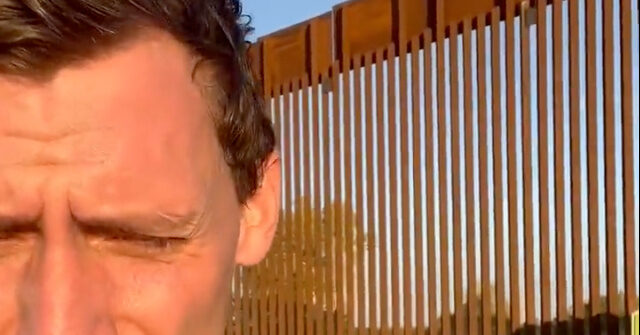 Blake Masters, the Republican nominee for U.S. Senate in Arizona, ripped Sen. Mark Kelly (D-AZ) and President Joe Biden for the crisis at the U.S.-Mexico Border, asserting they “turned over” the border “to murderous drug cartels.”

“So it’s a complete open border at this point.. and they caused this crisis,” Masters, referring to Biden and Kelly, told McDaniel. “I’m not going to pretend it was ever perfect at the southern border, but man, under President Trump, it was pretty darn good. It was under control.”

But @JWLines and I just saw a couple dozen Peruvians Indians and Cubans walk into our country from a cartel stash house a few hundred meters south of the border. Most won’t be deported.

Kamala Harris is a disgrace. pic.twitter.com/Pd82SvBqmK

“You see a lot of border wall, but if you drive a few miles in one direction, you see gaps in the border wall, and the cartels are not stupid, they know where those gaps are,” Masters, who is endorsed by former President Donald Trump, went on to explain. “It almost helps them filter people through.”

Breitbart Texas obtained a leaked Customs and Border Patrol document showing there were upwards of 181,000 migrants illegally entering the United States through the U.S.-Mexico border in August. The document was obtained from an individual within the agency who spoke on the condition of anonymity.

McDaniel pointed out the rampant human drug trafficking taking place, prompting Masters to note that migrants, including children, “are being horribly abused, sold into sexual slavery.”

One official told me that closing this particular gap had the effect of shutting down a known cartel staging site, the “rape tree”, a grove 300m behind these containers, where the coyotes would tie up and molest women and children migrants one last time before they crossed over. https://t.co/eNmaQEtDIu

Masters went on to say:

And the fentanyl that’s coming through, it’s killing American teenagers, like it really is this lawless zone, and Biden and Mark Kelly have turned over our whole southern border to the murderous drug cartels. The cartels are in charge, and our border patrol is underfunded, understaffed, and they’re literally not allowed by the Biden Administration to do their jobs.

Masters later bashed Kelly, who ran in 2020 as a moderate, for “voting like Bernie Sanders” and noted he could have used his vote in a 50-50 Senate to take a hardline stance against Biden as leverage for border security:

Mark Kelly, he’s showing up on t.v. pretending to care about border security. ‘I’m worried about inflation, I’m worried about border security.’ It’s like, Mark you’ve been in the Senate voting like Bernie Sanders to prop up Joe Biden’s failed agenda, and Mark Kelly could have stopped it. I have to remind people that one senator in a deadlocked senate – Biden needed Mark Kelly’s vote. Mark Kelly a year ago could have said, ‘Mr. President you’re not getting a single thing from me, not a single vote for an appointee, no funding, unless and until we get some border security.’ And he had that leverage, Biden would have had to finish the wall. Biden would have had to hire more border patrol agents. But Mark Kelly didn’t do it.

Earlier in the podcast, Masters stated that his opponent “pretends to be independent” and slammed him for voting for Biden’s agenda 94 percent of the time.

“It’s a lie… He votes in lockstep with Joe Biden,” said the candidate. “He’s Biden’s side-kick; he’s Biden’s most loyal lieutenant in the Senate.”