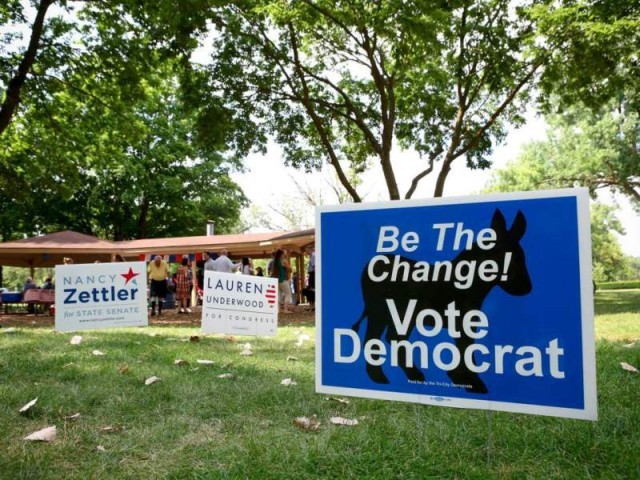 Democrats are “sounding growing alarms” a week ahead of the midterm election that they have no “real message” besides being against President Trump, according to a report.

Democrats are sounding growing alarms in the final push before the midterm elections that the party lacks the message it needs to combat President Trump and win back Democratic majorities in Congress. Some of the comments are positively biting, and illustrate that nerves are on edge less than two weeks before Election Day
…

Kofinis added: “In terms of a Democratic Party having even a semblance of a message, it’s just not there and that’s the reason this election is going to be unpredictable… . Nobody should be surprised if it’s a good night or a bad night.”

Chicago Mayor Rahm Emmanuel, who orchestrated the Democrats’ taking of the House in 2006 as former head of the Democratic House campaign arm, said back in 2006, Democrats had a clear message.

“It’s a little late now to do now,” he told CNN last week. “I don’t want to say we did everything right in ’06, but we had a ‘Six in ’06’ [agenda], a set of ideals that are very clear.”They also hint at the fights that will take place if Democrats underperform and fail to at least win back the House majority, which would count as a significant disappointment at this stage.

Democrats still think they have a good chance of retaking the House, since their voting base is “fired up to send a message to Trump,” but recognize the path to taking the Senate “has largely disappeared,” and Trump has started to fire up the Republican base.

Trump’s campaign last week announced that the president will host at least ten campaign rallies before election day next Tuesday.

Dave Wasserman, U.S. House editor of the non-partisan Cook Report, crunched numbers from Democrat victories in 2006 and 2010, and said he doubts there will be a repeat, saying that Republican voers are far more engaged in 2018 than they were in 2006 and 2010.

“There are a few reasons to doubt they’ll break in the same pattern as ’06/’10: 1) R voters are far more engaged in ’18 than they were in ’06 or Dems were in ’10. 2) Far more polling this year, giving us more opportunities to “diagnose” R problems. Still, a few surprises likely,” he tweeted.

There are a few reasons to doubt they’ll break in the same pattern as ’06/’10:

1) R voters are far more engaged in ’18 than they were in ’06 or Dems were in ’10.
2) Far more polling this year, giving us more opportunities to “diagnose” R problems. Still, a few surprises likely.

Democratic leaders say the lack of a specific message is by design, and they are focusing on broad themes they can tailor to each district — lowering health care costs, boosting wages, and fighting government corruption.

But the louder message appears to be anti-Trump.

“There’s one issue in this election: Donald Trump. That is it,” Rep. Peter Welch (D-VT) told The Hill. “And this election is about whether the country is going to vote for a mid-course correction.”

Recent polling by YouGov in Arizona, Indiana, and Florida showed that a majority of likely voters believed that if Democrats control the Congress, they would “stop President Trump on as many things as possible.”