Some of Democrat Rep. Angie Craig’s (D-MN) top staffers are advocates of the anti-law enforcement “defund the police” agenda, according to posts unveiled by a recent Washington Free Beacon report.

Liz Young, Craig’s district director, called on Minnesota to “fund counselors not cops” in the midst of Minnesota’s 2020 racial riots. On the same day she called for decreased law enforcement funding, she shared a report on police-involved deaths in New York with the caption: “Burn. It. All. Down.”

Young then downplayed the burning of a Minneapolis police station and argued that replacing the station with a “community-led health care clinic” or a library would “do infinitely more good.”

In addition to the anti-law enforcement tweets, Young encouraged her followers to donate to the Minnesota Freedom Fund, a nonprofit dedicated to bailing violent protesters out of jail. Young said the organization “does important work” in a since-deleted tweet. 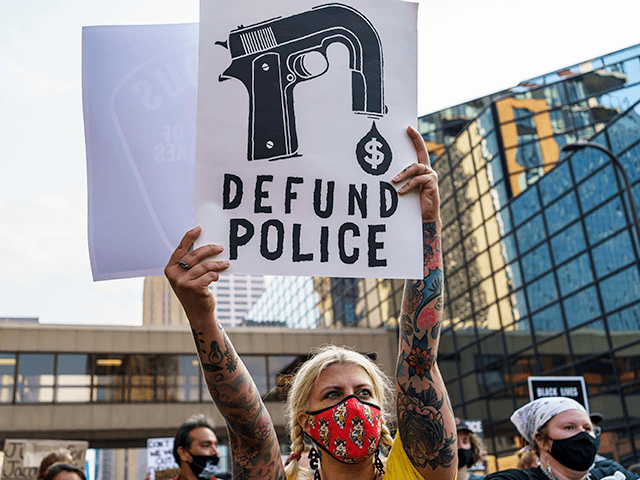 A protester hold a sign reading “Defund the Police” outside Hennepin County Government Plaza during a demonstration against police brutality and racism on August 24, 2020, in Minneapolis, Minnesota. (Photo by KEREM YUCEL/AFP via Getty Images)

After the Free Beacon’s report, Young deleted these tweets, but they were preserved with web archive tools. A spokesperson for Craig said the representative “does not hold the same views as those shared in her staffer’s personal posts.” The spokesperson claimed that Craig’s staff “includes Minnesotans from across the ideological spectrum, from lifelong Democrats to supporters of former President Trump.”

However, despite claims that Young’s views are not representative of Craig’s positions, the Minnesota congresswoman has fundraised with prominent defund the police activists. Last November, Craig fundraised in Los Angeles, California, with the Heart of LA Democratic Club, a progressive organization that endorsed defunding the police.

Kistner for Congress Statement on the Breaking News that Angie Craig’s District Director has been a Vocal Supporter of the Defund the Police Movement: https://t.co/jG31OzQXYb pic.twitter.com/S0F6DSPx7z

Earlier today the Washington Free Beacon reported yet another instance of Congresswoman Angie Craig continuing to tie herself to radical supporters of the defund the police movement. This time it was discovered that her top district staffer Liz Young tweeted to “Burn it all down” and encouraged her followers to donate to the Minnesota Freedom Fund which fully supports the defund the police movement and was responsible for bailing out violent criminals.

Kistner hopes to unseat Craig in 2022, as he lost to Craig by less than three points in the 2020 elections.