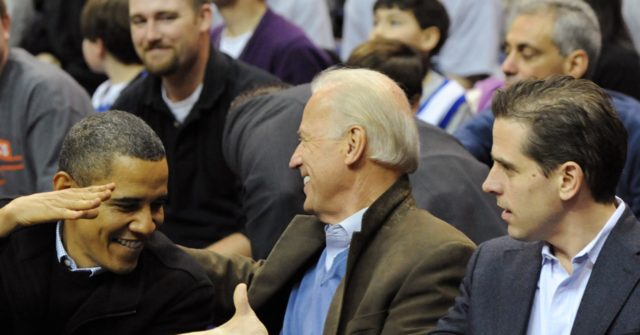 The Obama White House allowed Burisma’s PR firm to participate in a 2015 conference call discussing then-Vice President Joe Biden’s 2015 visit to Ukraine when he forced out a prosecutor with jurisdiction over Burisma, the New York Post reports.

At the time, Vice President Biden’s son, Hunter Biden, was a highly-paid member of Burisma’s board. The PR firm, Blue Star Strategies, is regarded as a “Democrat-run consulting firm,” according to Senate Republicans investigating Burisma.

The Obama administration let a Democratic p.r. company that worked for Ukrainian energy firm Burisma take part in a conference call about an upcoming visit to Ukraine by then-Vice President Joe Biden, emails obtained by The Post show.

An associate at Blue Star Strategies then emailed a memo with minutes of the conference call hosted by the White House to a top Burisma executive, Vadym Pozharskyi, as well as to Joe Biden’s son Hunter and Hunter’s business partner, Devon Archer, both of whom sat on Burisma’s board.

The trip, in December 2015, turned out to be the one during which Biden later bragged about forcing Ukrainian officials to fire a state prosecutor who was investigating Burisma by threatening to withhold a $1 billion US loan guarantee.

The Post also reported Wendesday that it had obtained an email sent by a Burisma adviser to Hunter Biden thanking him for arranging a meeting with then-Vice President Biden in Washington, D.C. Biden had previously denied any involvement.

The Post obtained the email from a hard drive copied from an abandoned laptop that was seized by the FBI last December. A copy of the hard drive was provided to an attorney for Rudy Giuliani, who is also acting as President Donald Trump’s lawyer.

The Senate Homeland Security Committee immediately announced that it would open an investigation.

The Biden campaign pushed back, saying that no meeting with Burisma had been on his “official schedules.” Democrats and the media tried to discourage each other from linking to the story, with some claiming it was “Russian disinformation.”

Social media giants Facebook and Twitter supressed the story, calling it “harmful.” Critics noted that the companies were censoring the news.

The issue of Joe Biden’s intervention in Ukraine, and his apparent conflict of interest relating to Hunter Biden and Burisma, were central to the impeachment inquiry last year. Democrats claimed throughout that Joe Biden had done nothing wrong.