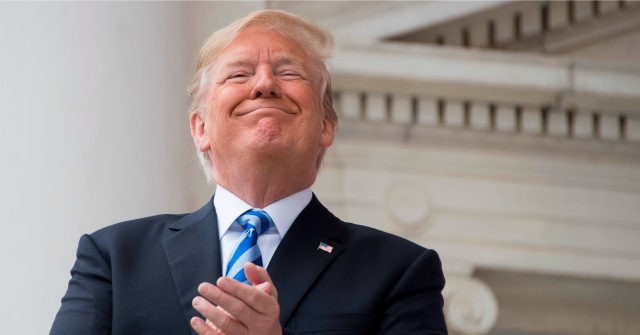 The majority of American voters oppose impeachment, according to the latest Harvard CAPS/Harris Poll survey.

Of the 1,295 registered voters polled, only 37 percent support impeaching and removing President Trump from office. While 43 percent favor “no action,” 60 percent of Democrat voters believe Trump should be impeached and removed altogether. However, independents are not on board:

Voters were surveyed May 29–30, after special counsel Robert Mueller’s public remarks on the now-debunked investigation into the Trump campaign and Russia collusion. His brief address appeared to give the left’s calls for impeachment a second wind.

“If we had confidence that the president clearly did not commit a crime, we would have said so,” Mueller explained.

First, the opinion explicitly permits the investigation of a sitting president, because it is important to preserve evidence while memories are fresh and documents available. Among other things, that evidence could be used if there were co-conspirators who could be charged now. And second, the opinion says that the constitution requires a process other than the criminal justice system to formally accuse a sitting president of wrongdoing. And beyond department policy, we were guided by principles of fairness. It would be unfair to potentially — it would be unfair to potentially accuse somebody of a crime when there can be no court resolution of the actual charge.

So that was Justice Department policy. Those were the principles under which we operated. And from them, we concluded that we would not reach a determination one way or the other about whether the president committed a crime. That is the office’s final position and we will not comment on any other conclusions or hypotheticals about the president.

Those remarks renewed mass calls for impeachment. A number of 2020 candidates are attempting to appeal to their far-left base by calling for impeachment proceedings:

It’s time for Congress to begin impeachment hearings and follow the facts. Robert Mueller clearly expects Congress to exercise its constitutional authority and take steps that he could not. We can’t let the president defy basic accountability measures built into our Constitution.

Mueller’s statement makes clear what those who have read his report know: It is an impeachment referral, and it’s up to Congress to act. They should.

Mueller leaves no doubt:
1) He didn’t exonerate the president because there is evidence he committed crimes.
2) Justice Department policy prevented him from charging the president with any crimes.
3) The Constitution leaves it up to Congress to act—and that’s impeachment.

Mueller made clear this morning that his investigation now lays at the feet of Congress. No one is above the law—Congress should begin an impeachment inquiry.

There must be consequences, accountability, and justice. The only way to ensure that is to begin impeachment proceedings.

What Robert Mueller basically did was return an impeachment referral. Now it is up to Congress to hold this president accountable.

We need to start impeachment proceedings. It’s our constitutional obligation.

If recent polls serve as any indication, endless calls for impeachment will fail to resonate with independent voters.

Full results will be available this week, as reported by the Hill: “Full poll results will be posted online later this week. The Harvard CAPS/Harris Poll survey is an online sample drawn from the Harris Panel and weighted to reflect known demographics. As a representative online sample, it does not report a probability confidence interval.”