“If the candidates for the Presidential Election on November 5, 2024, are as follows, for whom will you vote?” the survey asked, giving voters the choices of Trump, Biden, a Libertarian candidate, a Green candidate, or other.

What is more, 34 percent of those who say they did not vote in the 2020 election would support Trump, compared to 14 percent who said the same of Biden.

According to the survey, “Given the distribution of voters in the United States, an overall tie in the popular vote would most likely mean a Donald Trump victory in the Electoral College.” 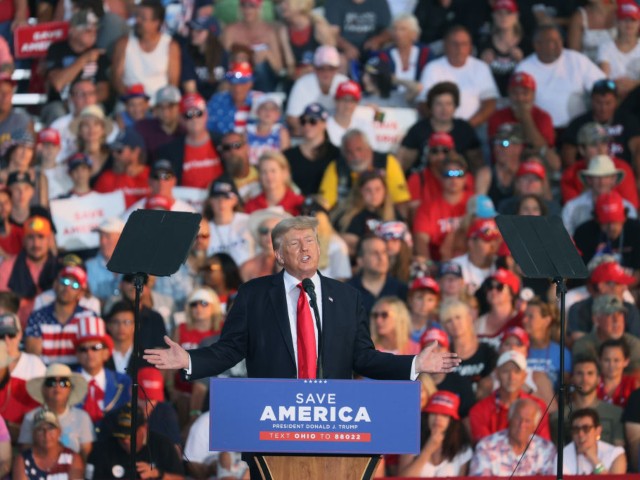 Former US President Donald Trump speaks to supporters during a rally at the Lorain County Fairgrounds on June 26, 2021 in Wellington, Ohio. (Photo by Scott Olson/Getty Images)

In recent months, survey after survey has shown respondents giving Trump the edge in hypothetical matchups against Biden as the current presidency is dominated by inflation woes, spiraling consumer sentiment, and mounting frustrations as mask mandates remain at the federal level.

While Trump has not formally announced intentions to run, many political figures suspect he will.

Last month, Trump gave an offhand comment while golfing on his Trump National golf course that he is both the 45th and 47th president.