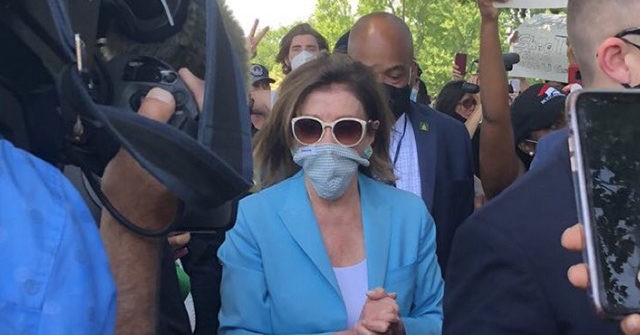 On Tuesday’s broadcast of MSNBC’s “Deadline: White House,” House Speaker Nancy Pelosi (D-CA) criticized President Trump by stating that gathering large numbers of people together without masks is “a dangerous thing at the time of a pandemic” and he should follow the science “to wear a mask and keep your distance and don’t gather in large numbers like that.”

Pelosi said, “I have three words to say to the president on that: science, science, and science. Science to not gather people in large numbers, in close proximity, without masks. [It’s] a dangerous thing at the time of a pandemic. Science to say we need testing, testing, testing. We all know that. And yet this president has miserably failed. … The 15 of March, there were 60 known deaths in the United States from the coronavirus. Yesterday, three months later, the 15 of June, there were 115,000 deaths from the coronavirus, a dismal failure on the part of the president of the United States. Calling it a hoax, [saying,] it’s going to disappear magically, a miracle is going to happen. What? We lost time and we lost lives. So, I would say the science to test, trace, treat, and isolate. The science to wear a mask and keep your distance and don’t gather in large numbers like that.”