Public approval of His Fraudulency Joe Biden’s (mis)handling of the coronavirus has collapsed to 39 percent approve, 57 percent disapprove.

Grandpa Joe is -18 points underwater on what was his strongest issue.

When Biden allegedly won the 2020 presidential election, it was primarily based on his promise to shut down the virus and not the economy. Well, we’re now 14 months into this failed presidency, and even the left-wing Politico couldn’t juice its Morning Consult poll to anything other than straight-up failure on that particular question:

Voter opinions about President JOE BIDEN’s handling of the pandemic continue to be an enormous anchor weighing down Democrats: Just 39% of registered voters approve of the job he’s doing, while 57% disapprove.

Biden is also upside-down by six points, 49 to 43 percent, on the issue of masks:

Democratic governors have been trying to get ahead of pandemic fatigue by lifting mask mandates around the country. The country is moving further and further in that direction. Forty-nine percent of voters want mask mandates removed, while 43% say it is too early for states to rescind their mask mandates.

If you recall, just last week, Biden declared it “premature” for states to lift their anti-science mask mandates. 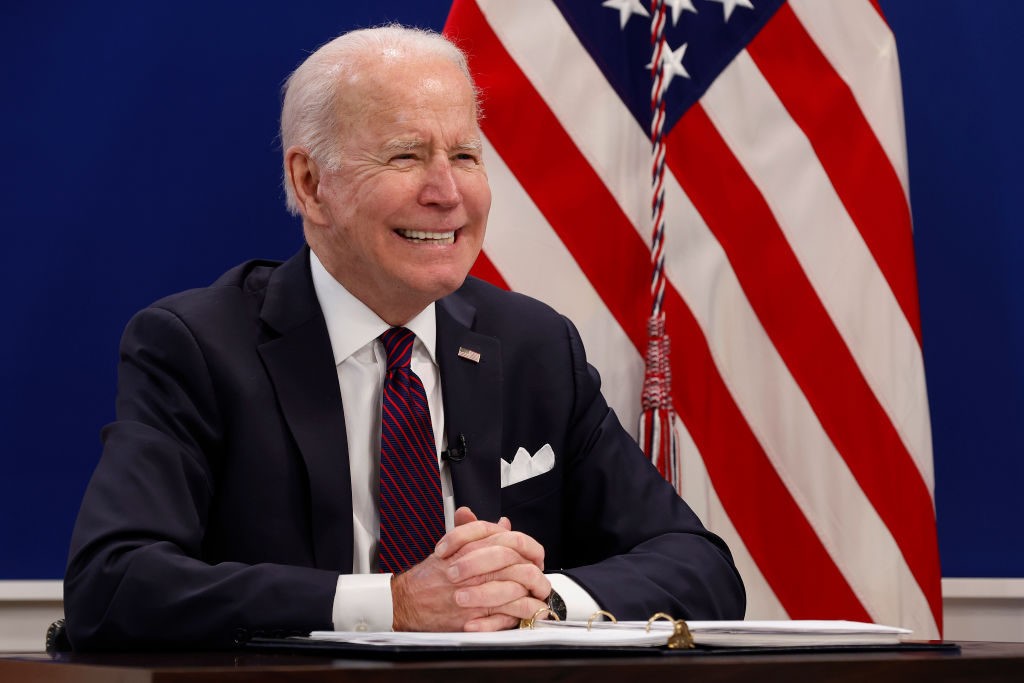 U.S. President Joe Biden delivers remarks at the beginning of a meeting with members of his Council of Advisors on Science and Technology in the South Court Auditorium at the Eisenhower Executive Office Building on January 20, 2022 in Washington, DC. (Chip Somodevilla/Getty Images)

Politico adds this observation: “In the teeth of the pandemic, anti-masking sentiment was a fringe obsession limited to the right. But with the Omicron surge subsiding, it’s now mainstream — and growing in popularity.”

Yes, well, this undoubtedly has a lot to do with the onslaught of left-wing elites caught without masks. Many of those same elites are themselves Mask Nazis. If Super Bowl and Oscar attendees need not wear masks while they are all indoors and packed together like sardines, why should I? Why should my kids?

The internals show only 55 percent of black voters approve of Biden’s handling of the China Flu, whereas  40 percent disapprove. The number is even worse with urban voters: 50 percent approve, 43 percent disapprove. That is Biden’s base. That’s the Democrat party’s base. Those are the people who need to turn out in breath-taking numbers to give the party any chance of not being wiped out in the upcoming midterms.

What’s happening to Biden, and by extension, the overall Democrat party, is this… Life has not returned to normal. The only people forced to remain masked are kids — the age group with the least to worry about from the virus.

“[Biden] said anybody with his results should leave office. Well Joe, what are you waiting for!” https://t.co/ztg2X4X6AD

On top of all that, after two hard years of anti-science panic from the Democrats, frauds like Dr. Fauci, and the corporate media, the data surrounding the ugly truth about lockdowns, social distancing, and masking is becoming undeniable and more difficult for our corrupt institutions to cover up. At best, it appears these zealous measures were pointless. At worst, they did our population enormous harm psychologically, medically, and all the related problems involving alcohol/drug abuse and addiction.

So the American people look at this, especially thriving non-mandate states like Florida and Texas, and ask, What the hell? They’re looking at celebrities and lockdown politicians partying without restrictions and getting angrier over the fact their own lives have not returned to normal.

Biden is in a Catch-22 of his own making…

President Joe Biden is failing on nearly every single major issue for Americans as support for his presidency continues to drop. https://t.co/sv2xaFdiGs

On one side, a dwindling side (thankfully), you have a group of people (mostly Democrats) still freaked out about the pandemic and wondering why Biden hasn’t ended it as promised. On the other side, you have a growing group of people who are over it, who want to return to normal, and are furious that they cannot, while those who attend the Super Bowl and Oscars can.

He’s wholly owned by far-left activists and the demonic teachers’ unions who want the pandemic to last forever. So if he were to do the right thing and return us to normal, he’d lose them, and his approval ratings would crater even further.