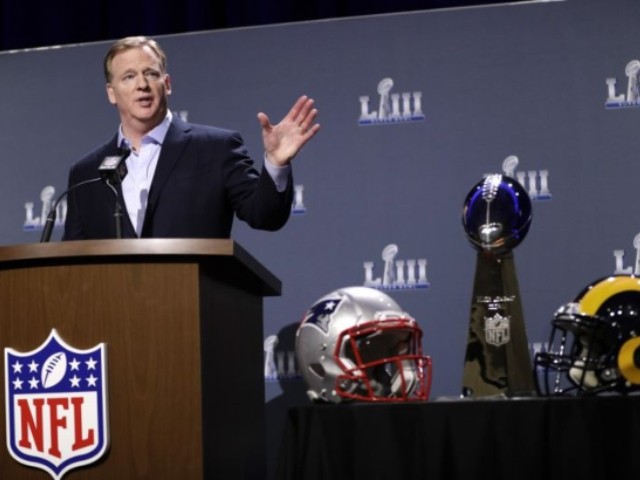 “With (former NFL quarterback and GM) Shaq Harris, and a number of other NFL executives, we can help train, give opportunity, manage and hopefully do some mentoring to advance those coaches so they do get that opportunity,” Goodell explained. The summit will be held at Atlanta’s Morehouse College.

Goodell was responding to the following question from an AP reporter at a press conference from the Super Bowl site in Atlanta:

“In an AP report this morning, we pointed out that the number of minority head coaches went from eight to a presumed four. Minority offensive coordinators are currently at two, which is up from one last. There were three minority quarterback coaches last season. How big a concern is the lack of minorities in the offensive coordinator and quarterback coach positions which many head coaches rise? And what steps with the Rooney Rule can be taken to increase those totals and provide more minority head coach opportunities.”

The Rooney Rule is an NFL initiative, started in 2003, requiring teams to interview minority candidates for head coaching and GM jobs.

Some think the Rooney Rule took a hit this year since the NFL started the season with eight minority head coaches, and now has four.

“We don’t look at the success or failure of the Rooney Rule in one-year increments,” Goodell said. “We have had the Rooney Rule around for nearly 20 years. It’s had an extraordinary impact on the NFL. Over 20 clubs hired minority coaches since that period of time. And it’s also been a signal for other industries, throughout the world, frankly, to adopt a Rooney Rule to change their organizations and I think it has. It has created opportunity. It’s given people an opportunity they have not in the past, and that is in the core of what we’re looking for.”

Goodell said NFL executives will meet with the Fritz Pollard Alliance in late February to discuss ways to “improve the Rooney Rule itself.”

The Fritz Pollard Alliance is an organization started in 2003 to “promote diversity and equality of job opportunity in the coaching, front office and scouting staffs of National Football League teams.”

In 1920, Pollard, along with Bobby Marshall, were the first two black NFL players.

In their upcoming meeting with the Alliance, which will take place in Indianapolis, Goodell said, “We are going to focus on those opportunities to create a deeper pool and more experience, give them opportunity, and we believe that is something that is critical for us moving forward to make sure we continue the progress that we’ve had.”

The current NFL minority head coaches are Mike Tomlin (Pittsburgh Steelers), Anthony Lynn (Los Angeles Chargers) and Ron Rivera (Carolina Panthers). Tomlin and Lynn are black and Rivera is Latino. The Miami Dolphins will announce after the Super Bowl that Brian Flores, who is of Honduran descent, will be their new coach. Since Flores is currently an assistant with the New England Patriots, who are playing in the Super Bowl, he can’t be officially hired until after the game.