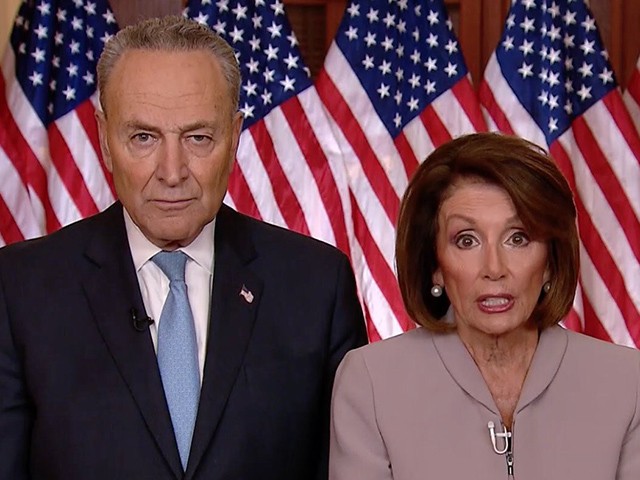 In contrast to Trump’s solo performance, the Democratic leaders appeared side-by-side in their rebuttal. A common reaction to their flat, sullen tableau was to Photoshop the pair as the man and woman in the 1930 Grant Wood painting “American Gothic”:

did anyone else see THIS? pic.twitter.com/8xYXniP89p

Other users got more creative, including swapping the faces of the two Democrat leaders.

This is what you two looked like to the American People! You both should retire!! You make our country look bad! pic.twitter.com/T7CSAOAaEy

Did you miss Chuck Schumer and Nancy Pelosi’s response to Trump’s #PresidentialAddress?

Straight out of a horror movie… pic.twitter.com/KBvBppxnhf

What is it with Democrats trying to hard……. pic.twitter.com/JbKgC6BmoQ

You versus the guy she told you not to worry about pic.twitter.com/elL5wvIxf7

Schumer told the president this weekend “enough with the memes,” as Trump shared several Game of Thrones-themed graphics captioned, “The Wall Is Coming.” Just three days later, the senator’s command has been met with a fresh wave of memes — bearing his own face, not the president’s.