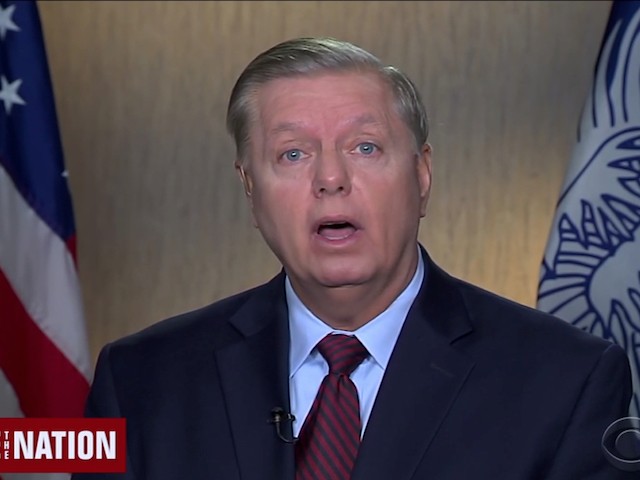 Sunday on CBS’s “Face the Nation,” Sen. Lindsey Graham (R-SC) said he trusted special counsel Robert Mueller “to be honest and fair” with his investigation into Russian meddling during the 2016 presidential election.

JOHN DICKERSON: South Carolina is also seeing significant rain and flooding. We turn now to Senator- Senior Republican senator from the state, Lindsey Graham who is in Clemson this morning. Senator, how’s the state doing?

SENATOR LINDSEY GRAHAM: We’re just waiting on it to get to where I live but it’s just- it’s hit the same areas that Matthew hit two years ago and the water from North Carolina eventually makes its way to South Carolina. North Carolina took the brunt of it. But the people who were flooded out two years ago are going to get flooded out again. And I don’t know how these communities make it quite frankly. I- like Williamsburg County’s just going to be years to recover.

DICKERSON: Quickly senator, are people- did they heed the warnings?

GRAHAM: Most did. Some didn’t. If you live near water you should’ve left a long time ago. The rivers are the most dangerous thing now. Most people did. So I can’t- The governor did a good job. The Trump administration’s called me about four or five times, “what you need that you don’t have?” So I’m pleased with the federal and state response but it’s really up to individuals to sometimes, you know, use good judgment and unfortunately some people have not used good judgment.

DICKERSON: Let me ask you a couple of other pieces of news that are in the news. Senator, in the Mueller probe you’ve been focused on collusion, this question of a conspiracy that has–

DICKERSON: –been alleged during the campaign.

DICKERSON: So there’s now been a plea deal from Paul Manafort the chairman of the campaign. How do you read that?

GRAHAM:  I don’t know yet. I know that from the judiciary point of view, we found no evidence of collusion between the Trump campaign and the Russians. I think Richard Burr said from the intel point of view that he’s seen no evidence of collusion, but we’re waiting on Mueller. Let’s let Mueller do a- do his job. I don’t know what Manafort has to offer. I don’t know if it’s anything meaningful, but I’m intent on making sure that Mueller completes his investigation without political interference and I can answer questions about the report once it’s issued. I’m very disappointed no Democrat seemed to be worried about the corruption in- at the Department of Justice and the FBI regarding the Clinton email investigation, the early stages of the Russian investigation, I’m worried about that. But when it comes to Mueller, let’s let him do his job.

DICKERSON:  You’ve trained prosecutors you were a prosecutor. Give me your sense of how a prosecutors doing if he’s- if he’s indicted more than 32 people, three companies, gotten six plea deals, and initiated actions that have led to two more plea deals and gotten them a victory in court, how is that prosecutor doing?

GRAHAM:  Well you’ve got to look at the substance of what people pled to. Some people pled to lying to the FBI like Papadopoulos and got two weeks in jail. So I don’t see this a big event. Manafort could have a lot of stuff or he could just have stuff around, you know, financial transactions. I don’t know yet. You don’t look at the numbers. Flynn would know a lot. I don’t know what kind of deal Flynn’s gonna get. At the end of the day, I haven’t heard anything coming out of the Mueller world showing collusion between Trump and the Russians, but that’s why you let a guy like Mueller do his job. I trust him to be honest and fair, and time will tell.

DICKERSON:  It’s I guess – what I was hoping – your experience as a prosecutor and also an impeachment manager who – who had to deal with a case that started out about a land deal it was a real different thing when it got to you. So this started with collusion may end up somewhere else. But you know the president has called it and continues to call it a witch hunt. So given that record though is it a witch hunt or is it proceeding as you would expect a prosecutor to go forward?

GRAHAM: I think it’s proceeding in a way that these things start with a land deal and cattle futures and wind up with a blue dress. This started with an accusation of collusion between the Trump campaign and Russia. Now we’ve got you know- you know- all kind of things in New York and Mr. Manafort’s lobbying business apart from before he met Trump. So I don’t know where it’s going go and the only thing I can tell you – not one Republican in the Senate has done anything to stop this investigation. The leadership of the House and the Senate – are Republicans – have pledged their efforts to make sure that Mr. Mueller finishes his job. I wish I had some Democrats concerned about Strzok- Strzok and Paige and Bruce Ohr. That’s going to be done later but –

GRAHAM: Nothing’s going to happen to Mueller’s investigation politically he’s going to be allowed to finish it.

DICKERSON: Let’s move to quickly to North Korea when you and I last talked it was some time ago you had suggested that the military think about moving dependents out of South Korea. That you mentioned that on the show Bob Woodward talks about that in the book and that President Trump was considering that option and the two of you discussed it. Is that covered accurately in the book and what happened?

GRAHAM: Yeah there was a point in time where it looks like nothing was going to happen. There was no dialogue going. And the- the way you lead up to this is that once you start moving dependents out of South Korea that’s a signal to everybody that we’re running out of time. Now we have we have engagements that I think are going to be fruitful. I hope they’re going to be fruitful. We’re not out of the woods yet when it comes to North Korea, but the whole discussion was around what should I do to handle this threat to our homeland. And here’s what the president was willing to do. If he has to, he’ll use military force to stop a missile coming to America with a nuclear weapon on it originating in North Korea. We were really close to having to make that hard decision. Now we have some time. Are they playing us? I don’t know. If they’re playing Trump we’re going to be in a world of hurt because he’s going to have no options left. This is the last best chance for peace right here.

DICKERSON: The way it was characterized in the book and I want to get see if this is right with you is that the president was one tweet away from suggesting moving dependents out and that that was read at the Pentagon that if he sent that tweet out it would’ve look like an act of war. Is that the way it went down?

GRAHAM: He was very frustrated with North Korea saying one thing and doing another. I’d suggested to him, along with others, that once you start moving you dependents out, then you’re preparing yourself for a military conflict. That’s the last decision to make and we got very close to that, but we pulled back and now we got a chance, I think, to get a resolution to this peacefully, to convince North Korea you’re better off without your nukes than you are with them, in terms of security and survivability. But it got close and the president is serious. The whole point here is, President Trump has no place to kick the can. For the last 30 years everybody has got it wrong and he has run out of options.

DICKERSON: All right. And we’ve run out of time. Senator thanks for being with us. We’ll be back in a moment.