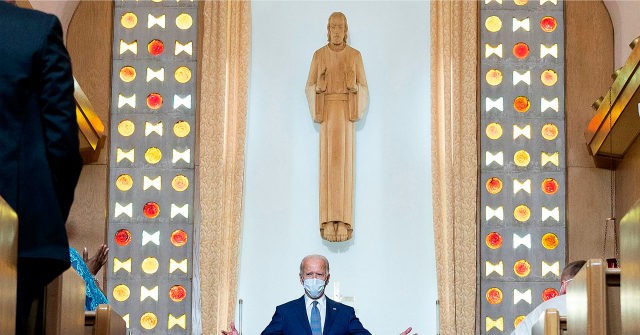 The head of the U.S. Bishops’ Committee on Pro-Life Activities, Kansas City Archbishop Joseph Naumann, said this week President Joe Biden should stop calling himself a devout Catholic since his actions contradict this claim.

“The president should stop defining himself as a devout Catholic and acknowledge that his view on abortion is contrary to Catholic moral teaching,” Archbishop Naumann told Catholic World Report (CWR) in a Feb. 13 interview. “It would be a more honest approach from him to say he disagreed with his Church on this important issue and that he was acting contrary to Church teaching.”

“When he says he is a devout Catholic, we bishops have the responsibility to correct him,” the archbishop continued. “Although people have given this president power and authority, he cannot define what it is to be a Catholic and what Catholic moral teaching is.”

Mr. Biden is “usurping the role of the bishops and confusing people,” Naumann said. “He’s declaring that he’s Catholic and is going to force people to support abortion through their tax dollars.”

“The bishops need to correct him, as the president is acting contrary to the Catholic faith,” he added.

The archbishop was also asked whether he approved of a South Carolina priest’s decision to deny Biden Holy Communion in 2019.

“I believe the president has the responsibility not to present himself for Holy Communion,” the archbishop said. “When Catholics receive the Eucharist, they are acknowledging the Real Presence of Jesus and also belief in the teachings of the Church.”

“President Biden doesn’t believe in the Church’s teachings on the Sanctity of Human Life and he should not put the priest in the situation where he has to decide whether or not to allow him to receive the Eucharist,” Naumann continued. “He should know that after 78 years as a Catholic.”

What Biden is supporting “is a serious evil,” the archbishop said. “I don’t know the disposition of his mind and heart but his act of supporting legal abortion is wrong.”

“It is grievous that one of President Biden’s first official acts actively promotes the destruction of human lives in developing nations,” declared Naumann in a joint statement with Bishop David Malloy, chairman of the Committee on International Justice and Peace.

“This Executive Order is antithetical to reason, violates human dignity, and is incompatible with Catholic teaching. We and our brother bishops strongly oppose this action,” the bishops stated.

The overturned Mexico City policy had “ensured U.S. taxpayer dollars only went to organizations that agreed to provide health services in a way that respected the dignity of all persons,” the bishops observed.

“We urge the President to use his office for good, prioritizing the most vulnerable, including unborn children,” they added.

“To serve our brothers and sisters with respect, it is imperative that care begin with ensuring that the unborn are free from violence, recognizing every person as a child of God,” they concluded.

The Catholic Church teaches that abortion is an abominable crime and a sin so grave that the harshest punishment the Church imposes — automatic excommunication — is attached to it.

The Catechism of the Catholic Church states: “From the first moment of his existence, a human being must be recognized as having the rights of a person — among which is the inviolable right of every innocent being to life.”

Abortion “is gravely contrary to the moral law,” the Catechism declares, and, therefore, a person who procures an abortion incurs excommunication from the Church “by the very commission of the offense.”

The Church also teaches that Catholic politicians have a “grave and clear obligation to oppose” any law that promotes abortion.