“Project Fear” would have us believe the United Kingdom leaving the European Union will leave it subjected to sudden and massive shortages of everyday basics like food and medicine, yet the nation shrugged off severe supply chain disruption in recent memory without empty shelves or closed hospitals.

I say in recent memory — in reality, it seems this recent episode has been all but forgotten. Perhaps it is inconvenient to recall how Britain’s most discussed port, Dover, and its continental partner Calais were logjammed for weeks at a time in 2015 as both the migrant crisis and industrial action by French farmers combined to make the Pas-de-Calais more like a warzone than a crucial conduit of trade.

The arrival of yet another dollop of Project Fear scaremongering on the now well-worn motif of empty supermarket shelves this week seems the perfect opportunity to revisit the events of 2015. It presents a convenient juncture to reflect, and to note the complete disinterest with which actual major disruption of Channel trade is treated, compared to the hysteria far less dramatic imagined future Brexit disruption is greeted with.

It is worth recalling the article I wrote on the subject of this now historic disruption back in July 2015. For your convenience here are some of the key lines:

The British government has issued advice to travellers to avoid the major port city of Calais and the main routes between the United Kingdom and Europe as migrants continue to disrupt services, violence intensifies, and delays grow.

In an extraordinary indictment of the deteriorating security situation in Calais, official UK Foreign Office advice suggests travellers make alternate plans when travelling to and from Britain, switching from the fast Eurotunnel shuttle and Calais ferry services to longer distance ferries, which can take over seven hours.

The French port is now so routinely delayed police in the south-east of England have had to put Operation Stack, the emergency response to Channel congestion, into practice over twenty times in just three months… A combination of industrial unrest as hauliers and farmers blockade major French roads – and the Pas-De-Calais – has only worked to the advantage of the estimated 6,000 illegal migrants encamped in the town.

Until they resumed services this morning, ferry operator DFDS’s customers had little choice but to divert, as the government recommends. The operator had suspended all services to the port twice in the past week and diverted its ships to other towns after one of its ferries was fired upon in a dispute at the weekend.

The DFDS ship was fired upon a number of times by assailants armed with flare-firing Very pistols and hit once – a grave breach of security…  it is possible the action was taken by militant elements within rival company MyFerryLink, and police are now investigating.

The summer of 2015 saw the confluence of two major events that created a near perfect storm for Dover-Calais.

One was major industrial action by French farmers and port workers, who blockaded roads across the country with tractors and burning piles of produce and tyres.

The farmers were angry about being undercut by cheaper foreign produce and blocked lorries crossing borders. Photographs from the archives give an idea of the scale and impact of these actions: 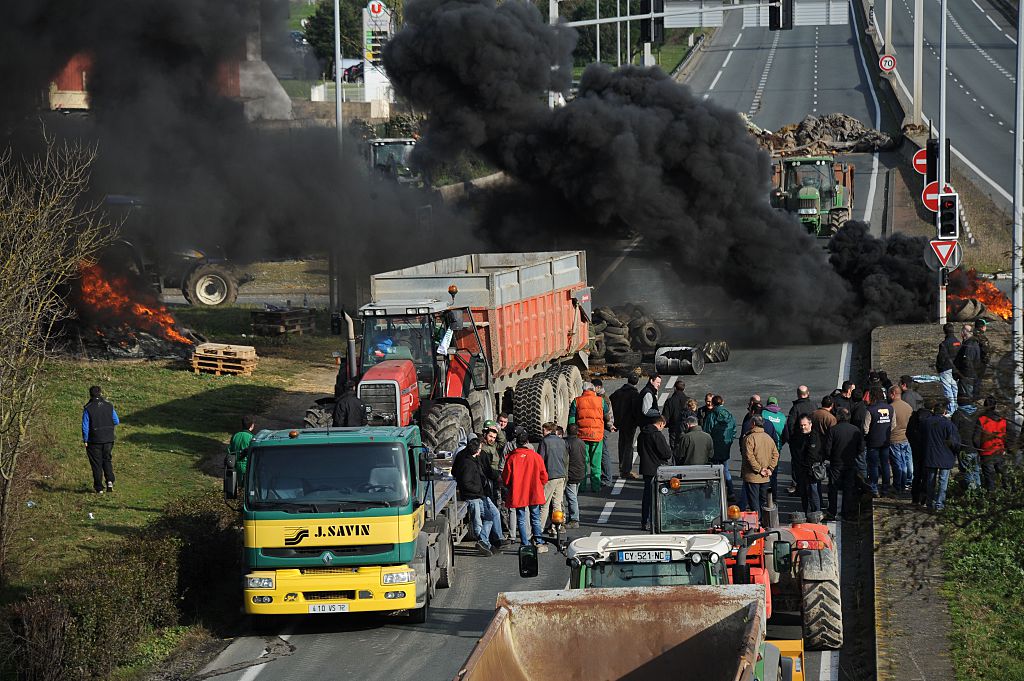 Black smoke rises from a burning barricade as French farmers as they block a road near La Rochelle on January 25, 2015 to protest against the falling prices of their products. About 100 farmers, mostly pig and dairy farmers, paralyzed the eastern sector of the port of La Rochelle with the help of about 40 tractors. / AFP / XAVIER LEOTY 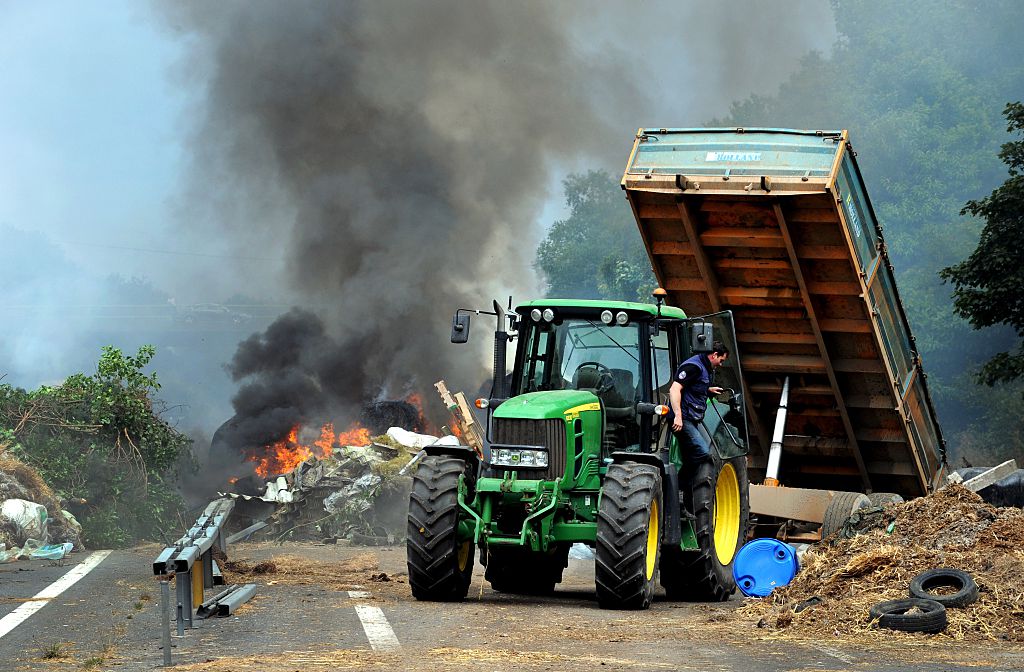 Farmers use a tractor along with burning hay and tyres to block the highway between Morlaix and Brest during a demonstration against the market prices of their products in Morlaix, western France, on July 22, 2015. AFP PHOTO / FRED TANNEAU 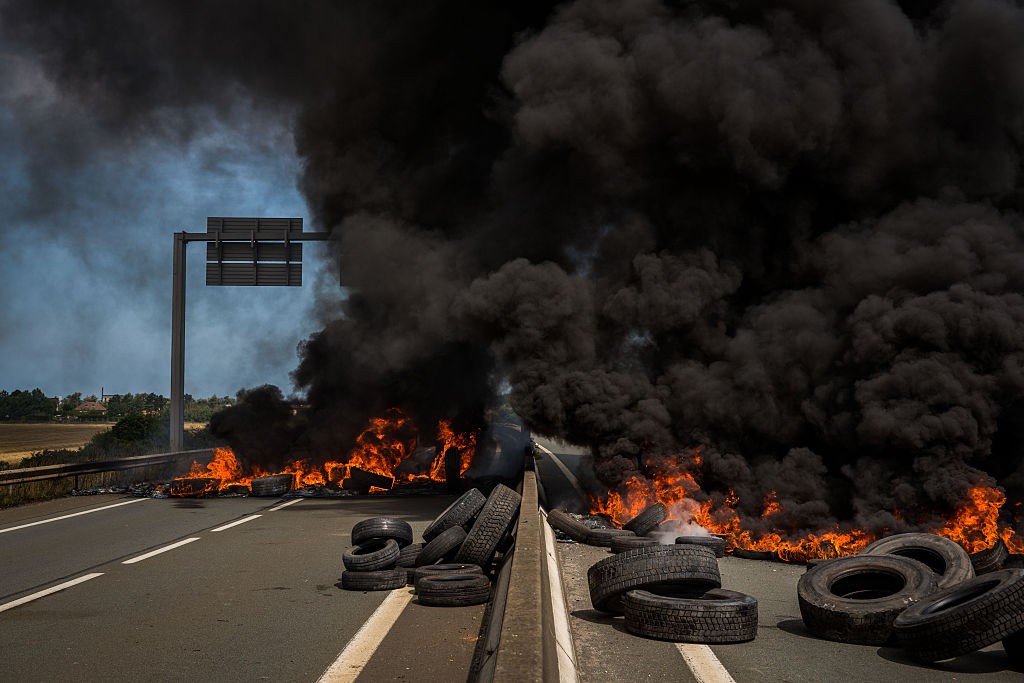 CALAIS, FRANCE – JULY 31: Ferry workers burn tyres on both lanes of a road leading to the port of Calais on July 31, 2015 in Calais, France. (Photo by Rob Stothard/Getty Images)

As Breitbart’s reporting from the time notes, these disputes became so acrimonious cross-channel ferries were actually fired upon. This remarkable event saw one major ferry operator actually suspend service on that route altogether and divert traffic to another nearby port. It is exactly this sort of redirection that the mainstream media has covered in alarmed tones in recent weeks, treating it as unprecedented, difficult, and even politically embarrassing.

(Although note please, major British ports themselves have said they’re ready for the challenge.)

Incredibly, and apparently against all the odds, despite the severity of the 2015 protests and the chaos they caused on the roads leading to and from the port of Calais, the United Kingdom did not starve, run out of clean drinking water, cheese, or Mars bars, or resort to announcing martial law and deploying the army.

The summer of 2015 saga does not end here, though.

These troubles were compounded by the sudden and massive meltdown being experienced that summer by the European Union over the migrant crisis, German Chancellor Angela Merkel’s entirely self-inflicted injury leading to several nations suspending the much celebrated Schengen zone agreement.

Considered one of the highest achievements of the European Union, the Schengen zone allows for totally open borders and free movement of people and goods between member states.

The reintroduction of border posts — with actual booths, barriers, and police officers checking papers — to deal with the massive flow of hundreds of thousands of people on the move across the continent impacted all travellers. This meant trucks and goods trains laden with food, as well as illegal migrants heading north.

The next time you see a scare-mongering article on the terrible implications of a “hard border” in Ireland as a consequence of Brexit, you might recall that just three and a half years ago dozens of European borders were suddenly and without warning subjected to just that, and there was no starvation or civil war. By contrast, the British government and British businesses have now had over two and a half years warning that things are going to change.

Remarkably, and despite it being illegal under EU law, Austria, Germany, Denmark, Sweden and Norway still have border checks in place over three years later. None of these nations has been reported to have run out of sandwiches… yet.

The migrant crisis impacted the Calais-Dover route in a big way. Huge numbers of migrants — over 6,000 at a time in 2015 — were moving through the “Jungle” camp at Calais, waiting for an unguarded freight lorry or slow-moving cross-Channel train to jump aboard.

The significant police operation trying to keep a lid on this, huge numbers of people walking on the major roads into Calais trying to hitch a lift to Britain illegally, and those even risking death by trespassing on the rail tracks to get near a freight train going north, all added up to significant delays that were felt across the water in Britain.

As the BBC reported at the time, as of late July 2015 the major road going to the Port of Dover in England had been totally closed and turned into a massive stationary lorry-park for 24 of the previous 40 days. Rest assured, if anything even remotely as apocalyptic sounding as that was on the horizon for Brexit, the Remainstream Media would have screamed themselves hoarse over it months ago.

It was estimated these delays caused on the French side of the border were costing the British economy hundreds of millions of pounds, with our EU membership of no help — yet life carried on, and quite possibly the vast majority of people in this country were barely aware there was a problem.

Certainly, people weren’t generally queuing in the streets for bread — but in 2019 this episode is not considered. Remarkably so, considering how pertinent it is to the debate around cross-Channel trade after Brexit.

Britain survived all of that in 2015 without breaking a sweat. The European Union has survived years of suspended internal open borders. And Britain will survive Brexit, too.