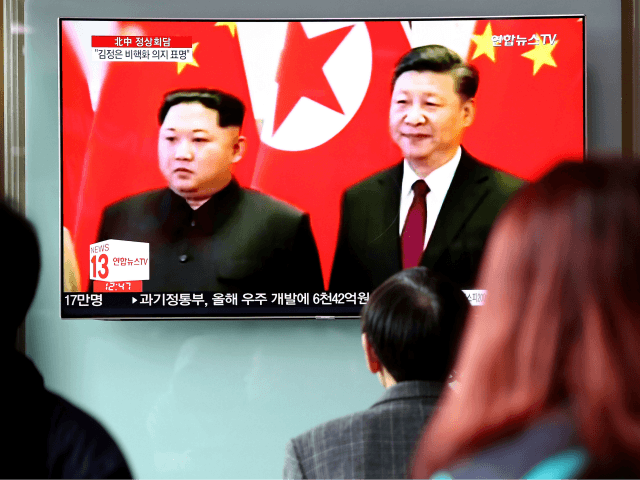 Kim Jong-un completed his visit to Beijing on Wednesday, beginning the 14-hour train voyage back to Pyongyang following a factory tour, talks with Communist Party leader Xi Jinping, and what some outlets describe as a “lavish birthday banquet.”

Kim is believed to have turned 35 on Monday, when he reportedly arrived in China. This was Kim’s fourth trip to the country and the first this year, after making three visits throughout 2018.

South Korea’s Chosun Ilbo reported on Wednesday that Kim spent his final evening in China at Beijing’s Great Hall of the People, where Xi Jinping “threw a lavish banquet for Kim to celebrate his birthday.” Kim’s wife Ri Sol-ju was reportedly in attendance along with other high-ranking North Korean officials, including sister Kim Yo-jong.

Beyond the festivities, Kim reportedly spent time at a pharmaceutical factory in Beijing owned by the company Tong Ren Tang, which South Korean outlet Yonhap describes as “the largest producer of traditional Chinese medicinal products” and a 300-year-old company. China has often opened the doors of its businesses to North Korean visitors, encouraging them to embrace manufacturing and development in the strict communist fashion that China has. While many incorrectly believe that China has pursued “capitalism” by allowing businesses to exist, all Chinese businesses are run by regime-friendly owners, if not directly owned by the Chinese state itself, allowing for full government control of the economy.

Yonhap adds that, prior to the banquet, Xi also treated Kim to lunch at the Beijing Hotel, a luxury five-star institution.

While reports indicate that Xi and Kim made time to enjoy each other’s company, neither country has divulged any significant details of what they discussed together or any official agreements signed by the two. Yonhap reported that Kim and Xi held at least one extended one-on-one meeting in addition to festivities that allegedly focused on North Korea’s illegal nuclear program, though neither side has confirmed this.

China’s Foreign Ministry has refused to confirm any details of Kim’s visit. Asked about discussions between Kim and Xi on Wednesday, ministry spokesman Lu Kang told reporters, “There is no doubt that General Secretary and President Xi Jinping will meet and hold talks … Let’s wait for the official release of the relevant information.”

On Tuesday, Kang was not significantly more open about the encounter.

“It is an important part of our fine tradition to maintain high-level exchanges. As for the arrangements of Chairman Kim Jong Un’s visit, we will release relevant information in due course,” he told reporters, insisting that Kim’s visit had nothing to do with the presence of American economic negotiators in China this week and that China is an “important force” in resolving the dispute between North Korea and the United States.

Pyongyang and Washington are still technically at war, as the parties to the 1950 Korean War never signed a peace treaty. North Korea claims to maintain its illegal nuclear program to prevent a U.S. invasion. Washington, meanwhile, insists that the nuclear program violates international law and poses a threat to the region far larger than to American assets there. One failed nuclear test could devastate the environments of neighboring China, Russia, and Japan.

Kim met with President Donald Trump in June 2018, an unprecedented event in the short history of North Korea. Many outlets speculated that his meeting with Xi this week was intended to prepare him for an upcoming second summit with the American president, which the White House has told reporters will occur to build on the progress made last year. While North Korea has refused to end its nuclear weapons program, it has not illegally shot rockets at American allies like Japan since late 2017 and returned some of the remains of U.S. soldiers killed in the country during the active era of the Korean War.

CNN recently reported that American officials have begun the search for a second venue for Trump and Kim to meet. The first encounter occurred in Singapore. White House representatives are reportedly looking at Bangkok, Thailand; Hanoi, Vietnam; and cities in Hawaii as potential hosts. Choosing a location that Kim is comfortable with is key, as human rights groups have compiled significant evidence that he is complicit in crimes against humanity, a universal international crime, and Kim will likely wish to avoid countries willing to act on that evidence and arrest him. Kim also owns an old, unreliable aircraft that may not allow him to travel too far out of his country without refueling, an optical embarrassment next to Air Force One.