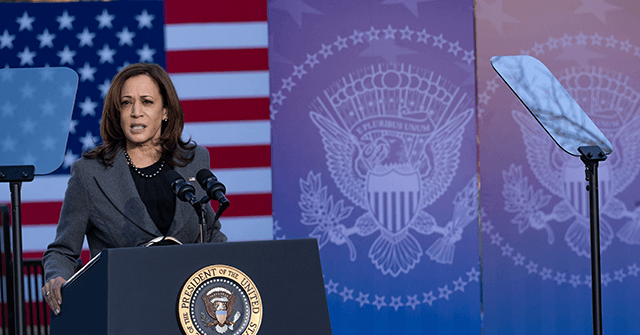 While Harris has taken a beating in the establishment media for failing to successfully destroy election integrity, reduce illegal immigration, or communicate President Biden’s agenda successfully to the press, Harris is in reset mode, the second reset in two months, the Washington Post reported Friday.

The reset, already underway, encompasses hiring a new communication’s director, along with showing herself at Biden’s “side for big events”:

She is mulling a heavier media schedule after months of looking warily at such engagements. She is looking to benefit from an extensive schedule of midterm campaigning that aides hope will revive Democrats’ faith in her political skills and popular appeal.

The changes large and small come at a pivotal point for the first woman to hold the vice presidency, and the first person of Black and Asian descent, according to White House and vice-presidential aides and supporters inside and outside the Beltway. Many spoke on the condition of anonymity to discuss sensitive talks.

Friday’s reported reset for Harris is the second reset in two months, and it comes after a New York Times columnist suggested Biden should replace Harris with Democrat-allied Rep. Liz Cheney (R-WY).

“Is that what America needs in 2024 — a ticket of Joe Biden and Liz Cheney?” Thomas Friedman suggested.

.@LesterHoltNBC in NBC News Exclusive: “You haven’t been to the border.”

Vice President Kamala Harris: “And I haven’t been to Europe.” pic.twitter.com/ryjkhb69GX

In December, the establishment media reported Harris and her office had undergone a “difficult reset” after multiple staffers announced they were leaving amid office turmoil.

Breitbart reported in July, “Other staffers in the Biden administration told Axios Harris’s office is a ‘shitshow.’ The outlet describes it as filled with ‘poorly-managed… people who don’t have long-term relationships with her,’ an overall ‘operation sometimes visibly out of sync with Biden’s.’”

Harris is reportedly familiar with rehabilitation.

During the Democrat primary in 2019, Harris reset her failing bid to become president before dropping out of the race months later, the New York Times reported.

“She is attempting to reset her campaign after stagnating in Democratic primary polls, using her strengths as a prosecutor,” the paper wrote about a shift in communication strategy:

Sunday night, she added something new. After her signature windup of “let’s speak truth,” she replaced her usual recitation of Democratic policies with an attack on President Trump, accusing him of enabling bigotry and divisiveness and refusing “to call neo-Nazi violence what it is: domestic terrorism.”

Harris later characterized her departure from the primary race as “one of the hardest decisions of my life,” peaking with only 15 percent support among Democrats.

Congratulations, Kamala Harris, on this historic achievement! You earned it! https://t.co/0Fe8dIguNc

Upon winning the nomination, Biden choose Harris in 2020 to become his running mate and subsequently gifted her with two important agenda items: reducing migration through the southern border and destroying election integrity by federalizing local elections.

Both political projects have fallen flat for the vice president, leading to office drama, staff departures, and terrible polling numbers.

According to a December poll, only 32 percent of registered voters approved of Harris’s job performance.