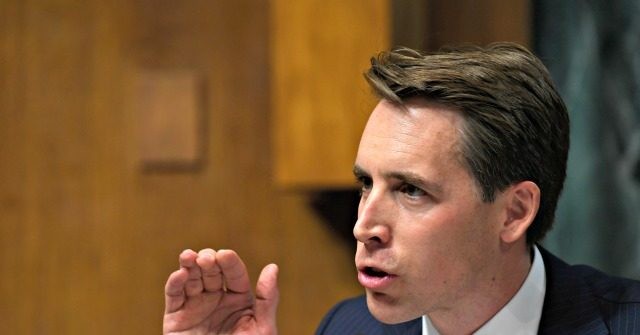 NBC News published an investigative report Wednesday which found that many of the libertarian and conservative groups that attacked Sen. Hawley’s legislation to end big tech censorship receive donations from Facebook and Google.

In response to the NBC News report, Sen. Hawley said that these allegedly limited-government conservative and libertarian organizations are “fine” with big tech censorship because they receive money from Facebook and Google.

NBC News’ report arises amidst rising interest in regulating and using antitrust against America’s most prominent technology companies in Washington, DC. The House Judiciary Committee launched a “top-to-bottom” investigation of big tech, while the Donald Trump DOJ said it will investigate Google for potential antitrust violations.

Sen. Ted Cruz (R-TX) grilled Google for their political bias last week in the wake of a Project Veritas report which revealed that one Google executive said that Sen. Elizabeth Warren (D-MA) should not break up Google because smaller companies will “be charged with preventing the next Trump situation, it’s like a small company cannot do that.”

After Sen. Hawley proposed his legislation, many conservative and libertarian organizations lashed out the Missouri Republican.

The libertarian R Street Institute said that the bill “hurts conservatives,” while the Competitive Enterprise Institute (CEI), said it was “highly regulatory and should be rejected.”

The Cato Institute, the American Enterprise Institute (AEI), and Americans for Prosperity (AFP) all lambasted the legislation.

Cato called it the “latest potential disaster,” while AEI said the bill “would blow up the Internet.”

Americans for Prosperity said that they agree with Sen. Ron Wyden (D-OR), who worked with then Rep. Chris Cox (R-CA) to draft Section 230 of the Communications Decency Act, which many tech experts, such as former FCC Wireless Bureau chief Fred Campbell, contend that Section 230 allows social media companies to censor without significant legal recourse.

We agree with Sen. @RonWyden on this! Government should not police speech online, and we urge lawmakers to oppose Sen. Hawley’s bill. https://t.co/jWZznxRgwr

Despite many conservative groups’ contention that Hawley’s legislation would crack down on free speech, Wyden suggested in May that he wrote Section 230 in May so “Facebook and other companies can take down bad actors” The Oregon Democrat said that social media platforms need to do more to “weed” out alleged “hate.”

I wrote Section 230 so Facebook and other companies can take down bad actors without being saddled with frivolous lawsuits. Platforms need to be much more vigilant about weeding out hate. This is a start. https://t.co/Zgl6JMmGpF

However, according to publicly available databases, every one of these conservative and libertarian organizations has received funding from Google, Facebook, or both of the tech giants.

Google, in its own words, provides “substantial funding” to the R Street Institute, Tech Freedom, and AEI. The search giant also donates to the National Review.

“I’ve never seen pushback in such a fashion before,” Schilling explained. “Even with net neutrality, these groups were all over the place — even though Facebook and Google supported it. It’s safe to say that it’s largely due to pressure from the social media giants that hasn’t been seen before.”

Given that Facebook and Google donated to many of the most prominent conservative and libertarian groups in Washington, DC, it raises the question over whether these groups continue to fight big tech regulation due to their allegedly free-market values or whether they wish to continue soliciting donations from big tech.

Schilling contended that it remains hard not to suggest that Facebook and Google’s donations to conservative and libertarian groups play a factor in their opposition to the Hawley legislation.

Speaking of the conservative resistance against Hawley’s bill, Schilling said, “It’s a very tough case to make that the Facebook and Google money don’t play a factor in such a strong and united pushback on this issue.”

Matt Stoller, a fellow at the Open Markets Institute, told NBC News that the  “saw this kind of collective temper tantrum by all their trade groups was” was over the legislative battle aimed at tackled sex trafficking online.

Fox News’ Tucker Carlson delivered a speech in June contending that Republican voters should rethink their relationship with many establishment conservative groups, especially given “they’ve now joined the leftwing campaign against free speech.”

Next month, the Charles Koch Institute will be holding a summit with the Anti-Defamation League and executives from major tech companies, including Pinterest, AirBNB, Patreon, and Mozilla. The stated purpose of the meeting is to formulate, quote: “best practices on the fight against hate and extremism online.” You know exactly what that really means: censorship of your views. For the left, fighting “extremism” always entails crushing normal conservatives. That’s why Pinterest has censored Live Action. It’s why Patreon banned Milo Yiannopoulos. It’s why Mozilla drove out Brendan Eich for donating to the wrong political campaign. Big tech has become a far bigger threat to your freedom than government is. The Kochs don’t care. Noting Google does violates libertarian orthodoxy.

Jeffrey Chester, the executive director of the Center for Digital Democracy, told NBC News that Washington D.C.’s anti-tech environment has forced big tech to rally their bannermen to fight tech regulation and antitrust.

“Corporate-funded groups are always engaged in issues like this; have done so for many years,” Chester explained. “But clearly the stakes are higher now, because we have never ever had a time when serious regulation (privacy, antitrust) is on the agenda. And bipartisan. So [last month’s] reaction shows there are five-alarm bells ringing in D.C. from Google and Facebook that have galvanized the groups they support.”