The European Union has done nothing to support the continued existence of Israel, Italy Deputy Prime Minister Matteo Salvini said Tuesday in Jerusalem, adding that the Jewish state can rely on the backing of Rome.

“The EU has in recent years been entirely unbalanced, it has condemned and sanctioned Israel left and right, for every step it took,” he told reporters.

The head of the Liga Party is on a 48-hour trip to Israel which includes a visit the Western Wall, the Yad Vashem Holocaust memorial and a meeting with Prime Minister Benjamin Netanyahu, AFP reports.

He kicked off his trip with a tour of Israel’s northern border with Lebanon, where the Israeli army has uncovered terrorist tunnels built by Hezbollah for attacks. Mr. Salvini said no country would tolerate enemy tunnels infiltrating its territory.

“I call terrorists what they are, which is terrorists,” he said, adding he was “very proud” of the Italian soldiers serving in UNFIL, the U.N. peacekeeping force in Lebanon, which is headed by an Italian general.

Welcome Minister @matteosalvinimi to our capital Jerusalem! I look forward to continuing our conversation and deepening the Israel-Italian partnership in fighting terror, combating #Hezbollah, strengthening public security and countering anti-Israel decisions at the UN and EU pic.twitter.com/mYjmW3J1XF

Mr Salvini’s criticism of the E.U. and its lack of support for Israel comes 12 months after 60 members of the European Parliament called on E.U. foreign affairs chief Federica Mogherini to stop E.U. funding and isolate the anti-Israel BDS (Boycott,Divestment and Sanctions) movement.

In a letter, the cross party group urged Mogherini to marginalize, both financially and politically, organizations such as BDS that are increasingly becoming a virulent source of anti-Semitism and anti-Zionism under the pretense of exercising freedom of speech and association.

Mr. Salvini touched on the importance of continuing that fight, saying Israel is “a safe haven for European and Western values in the region”, while adding that “whoever wants peace supports Israel”. 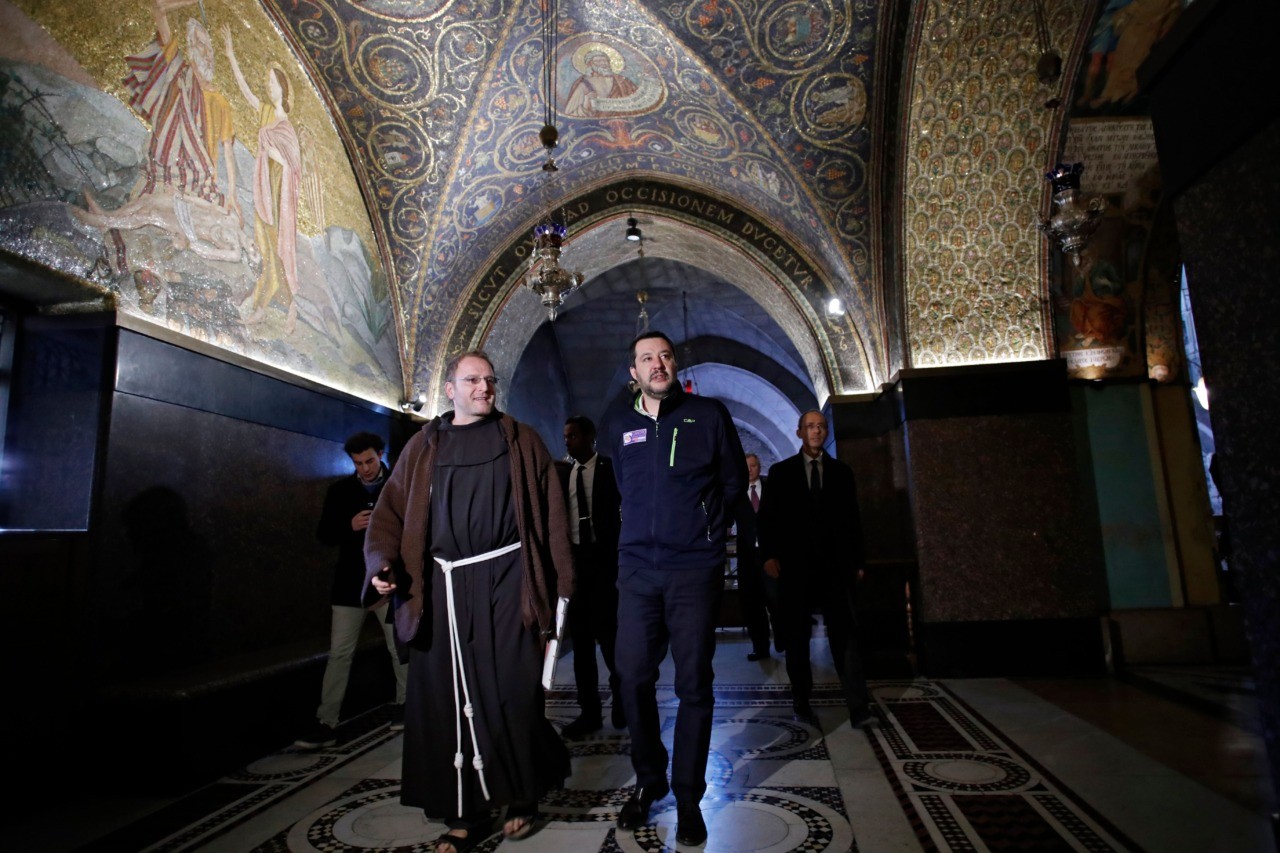 A Franciscan friar guides Italy’s Interior Minister and Deputy Prime Minister Matteo Salvini during a visit to the Church of the Holy Sepulchre in the Old City of Jerusalem, on December 12, 2018. (THOMAS COEX/AFP/Getty Images)

He then defended his visit from hard left detractors in his native Italy.

“Our government will fight all forms of anti-Semitic violence, regardless of how it manifests itself,” he vowed.