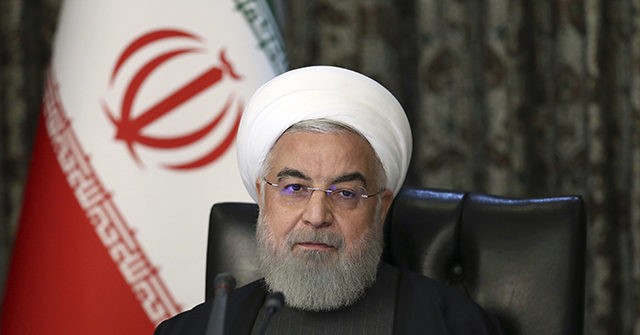 TEL AVIV – The “great nation” of Iran has smashed the U.S. knee that was on its throat, Iranian President Hassan Rouhani said Wednesday, in an apparent nod to the manner in which George Floyd died while being restrained by a police officer.

“Our dear nation smashed the [U.S.’] knee with the giant sledgehammer of national unity and solidarity,” Rouhani said during a cabinet session in remarks carried by both the Tasnim and Fars regime-affiliated news agencies.

“They (Americans) have always been like this throughout history. They have pressed their knee on the neck of every oppressed person they have found in order to kill him. This is their policy, not the policy of a single cop in a single city. This is basically the U.S. policy,” Rouhani said.

“But the great Iranian nation broke that knee. They (Americans) wanted to do the same in 2018. They brought the knee close to the throat of the (Iranian) nation. But our dear nation smashed their knee with the giant sledgehammer of national unity and solidarity. Now they (Americans) have no knee anymore to put pressure on the Iranian nation.”

He also slammed the U.S. as having the worst handling of the coronavirus pandemic, saying, “It has chosen the worst method in this regard, recorded the highest death toll and caused problems for its people. It has also proved that it lacks the necessary resourcefulness to govern such a large country.”

“The U.S. government has been discredited and has become discredited,” he said.

While Iran’s state-run media has been actively backing the George Floyd protests sweeping America, Tehran suppresses dissent of any kind at home, and routinely tortures and kills protesters.

“As all various plots that the U.S. has hatched against us until now have ended in failure, we are confident that this plot will get nowhere either. And we will do our utmost to boost our defense capability,” the Iranian leader went on to say.

He expressed his confidence Iran’s “two good friends” China and Russia would stand by its side “against such a plot.”

Separately, a fake U.S. aircraft carrier, carrying at least 16 equally fake warplanes, was spotted off by the Bandar Abbas port in Iran’s southern coast. The giant ship is thought to be used for training or propaganda purposes, as Breitbart News reported.

The fake carrier sits just a short distance away from the yard in which the Islamic Revolutionary Guard Corps (IRGC) unveiled over 100 new speedboats in May, the kind it routinely employs in encounters between Iranian sailors and the U.S. Navy.