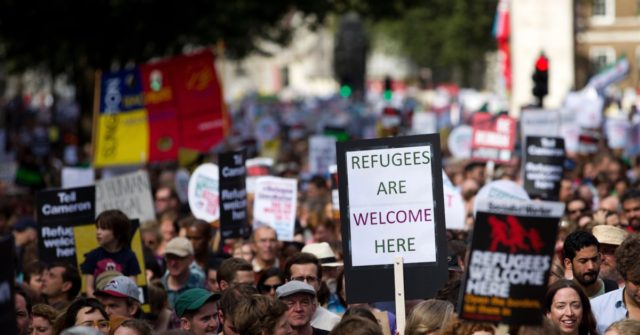 A report on immigration enforcement conducted by the National Audit Office admitted that the government has ‘no idea’ how many illegal migrants are currently residing in the United Kingdom.

The study noted that the last estimate of the population of illegal aliens with no right to remain in the country in 2005 at approximately 430,000, however, the report went on to say that independent research conducted by Pew in 2019 said that it could be as high as 1,200,000 people.

Rather than attempting to actually gauge the illegal migrant population, the Home Office’s immigration enforcement directorate has instead chosen to estimate the number through calculating interactions with immigration officials, which it says is around 240,000 and 320,000 cases per year.

The report went on to admit that the department is aware of more illegals, yet they were not included in the dataset as they have “had no contact with Immigration Enforcement or other parts of government within the previous two years”.

“Due to data quality issues, Immigration Enforcement cannot say whether the number of people “genuinely putting a demand” on its activities is increasing or decreasing,” the report admitted.

In response to the report, Meg Hillier of the Public Accounts Committee said: “The Home Office has no idea how many people are in the country illegally and doesn’t seem interested in finding out. It can’t demonstrate that its actions to control illegal immigration are working as intended, and doesn’t understand how different aspects of its work fit together.”

“Although there would be significant uncertainty around any estimate it [the department] developed, such an estimate could help the department to demonstrate that its activities are effective in deterring attempts to enter or remain in the UK illegally,” the report said.

Illegal Immigration to the UK Soars as Deportations Continue to Fall https://t.co/hfXztrqZCX

The National Audit Office found that the majority of illegal immigrants in the UK are set free into the country rather than being deported, noting decreases in funding for detention centres and immigration enforcement bodies.

In the period between November 2018 and October 2019, there were 46,900 illegal attempts to enter the country by migrants, up from 40,800 over the same period in 2018. However, the office did not say if this was due to increased reporting of cases or an increase in illegal migrants attempting to enter the country clandestinely.

Alp Mehmet, Chairman of Migration Watch UK, said in comments seen by Breitbart London: “This devastating report suggests that immigration enforcement has seriously decayed at a time when it is needed most. Budgets and returns have fallen to such an extent that it is having a harmful effect.”

“The report includes estimates by other organisations, including by Migration Watch UK, that there are up to a million people here illegally, and yet the Home Office only focuses on a fraction of this number each year. This can only spur more people to hide in the knowledge that they will fall off the radar.”

A Home Office spokesman said: “We have taken back control of our immigration system and for the first time in a generation, we will have full control over who comes and stays here. As this report acknowledges, the nature of immigration crime and offending is complicated and we are consistently looking at ways to get ahead of the organised gangs behind it.

“We work tirelessly with international partners and agencies, such as the NCA, to tackle illegal migration, close down routes for people smuggling and return those with no right to remain the UK wherever possible. We make no apology for seeking to deport foreign national offenders and since 2010 we have removed more than 53,000 criminals.”

7 in 10 Britons Worried About Effect of Immigration on Population Growth https://t.co/OqmQfhYgCO