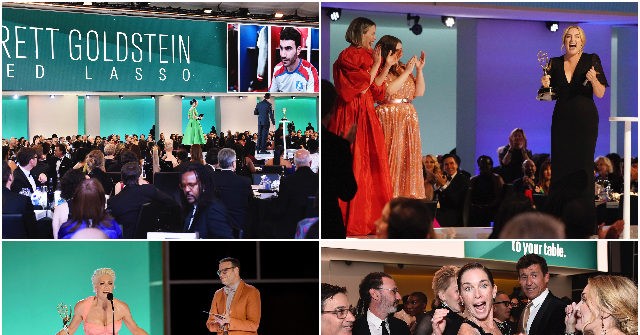 In response to the controversy over the images of maskless celebrities partying at the Emmys while staffers huddled behind their face-coverings, the Los Angeles County Department of Public Health defended the display by touting Hollywood filming and television production “exceptions” put in place a year ago.

In a statement shared by CNN’s Oliver Darcy, the department said that “safety modifications” were made for an event like the Emmys due to the “exceptions” made for film and television productions, even going so far as classifying celebrity attendees as “performers.”

“LA county’s Health Officer order requires everyone to wear a mask indoors, whether vaccinated or unvaccinated. However, exceptions are made for film, television, and music productions, as additional safety modifications are made for these controlled interactions,” the statement said. “The Emmy award show is a television production, and persons appearing on the show are considered performers.”

The rules state that vaccinated individuals must wear a mask indoors, though images show staff and other individuals at the event wearing masks. Accusations of a stark double standard — one for celebrity elites and one for everyone else — caught fire on social media Sunday night.

My kids eat their lunches on their laps in the school auditorium, facing forward and get yelled at if they talk to friends. https://t.co/MEosTXkKjp

“All persons appearing on or in the audience of the Emmy award show were fully vaccinated against COVID-19,” the statement said. “Also, Public Health was informed that each of these persons had a verified negative PCR test 48 hours prior to the show. In addition, the production crew, pursuant to CalOSHA requirements, were required to be fully vaccinated or are testing (either PCR or antigen) twice per week.”

The Emmys reached out to Public Health in advance to share their safety protocols, which exceeded the baseline requirements for television and film productions. Careful planning before large events is essential to assure that all health and safety requirements are adequately addressed. Full vaccination of all attendees is one of the most powerful ways to achieve a safe environment. Testing of event participants and crew and optimizing ventilation are additional powerful tools. Public Health will continue review the protocols of future large television production events and prescribe additional safety modifications to mitigate the risk of COVID-19 transmission.

New: LA County Department of Public Health tells me that the mask-less Emmys were not in violation of the county’s mask mandate because “exceptions are made for film, television, and music productions” since “additional safety modifications” are made for such events. pic.twitter.com/6S105zYjbJ

During the show on Sunday night, none other than comedian Seth Rogen pointed out the hypocrisy on display.

“Let me start by saying there is way too many of us in this little room! What are we doing? They said this was outdoors! It’s not! They lied to us,” the comedian said. “We’re in a hermetically sealed tin right now. I would not have come to this! Why is there a roof? It is more important that we have three chandeliers than that we make sure we don’t kill Eugene Levy tonight. That is what has been decided.”

Later, the event’s host Cedrick the Entertainer said everyone at the show had been fully vaccinated whilst taking a subtle jab at rapper Nicki Minaj.

“It feels amazing to be here. We’re all vaccinated in this room,” he said. “I’m vaxxed, but I didn’t have no reactions like Nicki Minaj‘s cousin’s friend. I got the Pfizer [vaccine]. Because I’m bougie. That’s the Neiman Marcus of vaccines. There’s Moderna, that’s Macy’s, and then Johnson & Johnson, that’s TJ Maxx, of course.”