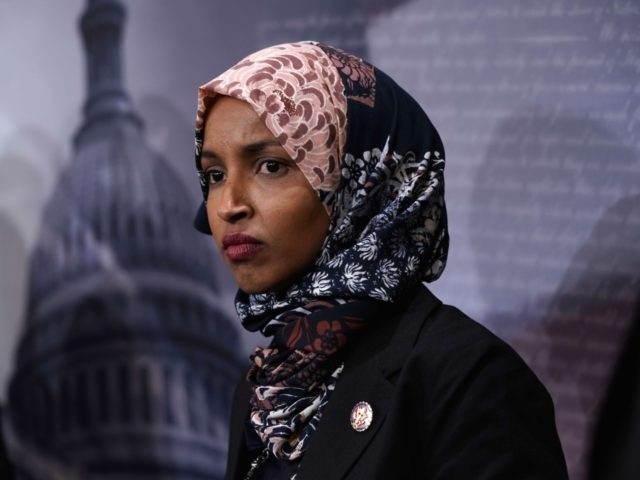 Rep. Ilhan Omar (D-MN) attacked Special Envoy on Venezuela Elliott Abrams in a House Foreign Affairs Committee session on Wednesday, accusing him of genocidal culpability for a “massacre” in 1980s El Salvador during which “more than 800 civilians, including children as young as two years old, were brutally murdered by U.S.-trained troops.”

Her tirade was suspiciously similar to an article about El Salvador published the previous day by the Qatar-based Al-Jazeera news network.

Omar’s monologue can be seen in its entirety below. It should be noted that she smirks a great deal during the exchange, an expression that has been classified by the Left as a hate crime, and she appears to have some difficulty reading the notes that were provided to her:

Omar began by getting Abrams’ name wrong, addressing him as “Mr. Adams,” and asking why the House Foreign Affairs Committee should trust his testimony because “in 1991, you pleaded guilty to two counts of withholding information from Congress regarding your involvement in the Iran-Contra affair, for which you were later pardoned by President George H.W. Bush.”

“Yes or no, would you support an armed faction within Venezuela that engages in war crimes, crimes against humanity, or genocide if you believed they were serving U.S. interests, as you did in El Salvador, Nicaragua, and Guatemala?” she demanded.

Omar zeroed in on El Salvador:

On February 8, 1982, you testified before the Senate Foreign Relations Committee about U.S. policy in El Salvador. In that hearing, you dismissed as communist propaganda reports about the massacre in El Mozote in which more than 800 civilians, including children as young as two years old, were brutally murdered by U.S.-trained troops.

“During that massacre, some of those troops bragged about raping 12-year-old girls before they killed them,” she added.

“You later said that the U.S. policy in El Salvador was a fabulous achievement. Yes or no do you still think so?” she demanded.

“From the day that President Duarte was elected in a free election to this day, El Salvador has been a democracy. That’s a fabulous achievement,” Abrams replied.

When Omar repeated her question, Abrams first dismissed it as “ridiculous,” then answered “no.”

“I will take that as a yes,” Omar snapped.

“I am not going to respond to that kind of personal attack, which is not a question,” Abrams responded.

Center for Security Policy Vice President for Government Relations J. Michael Waller noted on Thursday that Omar’s tirade precisely matched an article highly critical of Abrams published on Tuesday by Qatar’s Al-Jazeera, right down to the sequence in which she deployed her talking points:

Here are Omar’s February 12 talking points in Al Jazeera that she used on February 13 against #ElliottAbrams. https://t.co/LGiNw6U58r

The Qatari government supports Venezuelan dictator Nicolás Maduro against Juan Guaidó, the interim president supported by the United States, its Latin American allies, and many European countries. The article Al-Jazeera published about Abrams painted him as a bloodthirsty neoconservative with few qualms about using indiscriminate violence to overthrow Latin American governments the United States dislikes.

City University of New York professor emeritus and Hudson Institute adjunct senior fellow Ronald Radosh took Omar to task at the Daily Beast on Thursday, noting that the El Mozote massacre took place in 1981 and Abrams testified to the Senate about the event in 1982, but it was not until 1992 that forensic analysis conclusively determined it occurred largely as rebel forces described it.

The El Mozote incident occurred in a particularly ugly war zone where both sides were known for spreading disinformation against the backdrop of Cold War information warfare, which was every bit as vigorous as today’s information wars but prosecuted with far less powerful communications technology. It was a time when canisters of film had to be smuggled through free-fire zones, rather than photos uploaded to the Internet in real time through mobile connections.

The information warfare game in Cold War Latin America was straightforward enough in grand strategy: play up abuses by U.S.-backed forces while downplaying the atrocities committed by allies of the Soviet Union. Left-wing guerrillas assiduously courted Western reporters to shape media coverage in a way that would favor their revolutionary cause. The Soviets wanted these conflicts to be as savage as possible because they hoped Western leaders would recoil from the bloodshed and withdraw support from their proxies, while the Soviets had no problem getting their hands dirty by supporting theirs.

The situation in El Salvador in 1981 was the reverse of what Omar implied by linking it to Venezuela – the United States supported the government, while the Soviets backed rebels attempting to overthrow it through violence.

The village of El Mozote was destroyed by an elite El Salvadoran counter-terrorism unit called the Atlacatl, trained by U.S. Special Forces advisers. The village was located in rebel territory, although the villagers apparently were not rebel sympathizers. The Atlacatl unit initially seemed to satisfy themselves the village was not a threat, only to return the next day, massacre the population, and burn down most of the buildings.

Radosh also condemned Omar’s Iran-Contra attack on Abrams as unfair, describing in detail how one of Abrams’ staunchest contemporary critics eventually came to believe he was politically prosecuted in an effort to criminalize foreign policy.

“Omar’s comportment at the hearing, as well as her obvious belief that the United States is an imperialist and reactionary nation that by its very nature abuses human rights, should alone be reason enough to have her removed before she can do real damage,” Radosh concluded, dismissing Omar as little better than the Code Pink protesters who interrupted the Abrams hearing to rave against “U.S. imperialism.”

Radosh here alluded to one of the big-picture problems with Omar’s attack: brutality was displayed by the proxies of both sides during the Cold War, and focusing purely on what the anti-Communist side did is essentially continuing the Soviet Union’s information warfare strategy decades after the conflict ended, giving the losers a shot at rewriting history to their taste.

Older Democrats who can think a few moves ahead will not relish the prospect of relitigating the 1980s and reminding Americans which side many Democrats came down on, especially since their party spent the past two years painting contemporary Russia as the greatest threat to the world. However one judges the threat of Putin’s Russia, the Soviet Union was much worse.

The other problem with Omar’s attack is that El Salvador’s Cold War battles occurred over thirty years ago and have little relevance to the current situation in Venezuela, where Nicolás Maduro is indisputably the massive violator of human rights and will be the one ordering any massacres yet to come.

Comparing the perilous Reagan-era effort to repel a Communist insurgency to Venezuela’s desperate effort to escape from a left-wing tyrant is grotesque. Giving Maduro the idea he might be able to retain power by following Soviet information warfare strategies – and by making Venezuela so bloody that Western powers back away in disgust – is incredibly dangerous.

As for El Salvador, it just took advantage of the democracy America defended in the Eighties to give both its left- and right-wing parties the boot and elect a third-party anti-corruption candidate as president. Such things do not happen in socialist or communist tyrannies.