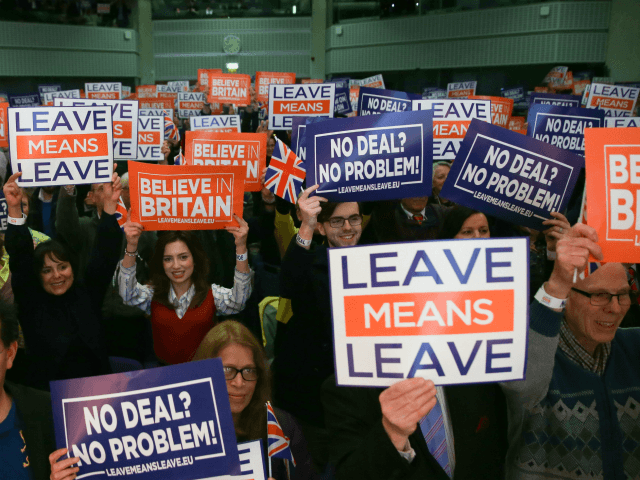 A senior civil servant has blown the whistle on “Project Fear Mark III”, revealing that the country is actually well-prepared for a “No Deal” Brexit and scare stories about Britain “crashing out” into “chaos and doom” are “absolutely untrue”.

The anonymous official, who has been working on Britain’s preparations for a Brexit on World Trade Organization (WTO) terms — the so-called “No Deal” scenario — revealed in a Telegraph article that there are “hundreds” of plans in place to ensure that outlandish threats of food, water, and medicine shortages will not be realised, and that “it is purely a political decision not to make this clear to the public and nervous backbench MPs”.

“Project Fear Mark (I think) III… claims that we will all ‘crash out’ over the white cliffs of Dover into the Channel at 11 p.m. on 29 March 2019 and wake up to certain chaos and doom… [I]t is absolutely untrue, as anyone who, like me, has been involved in Brexit work for the past two-and-a-half years in Whitehall will tell you,” he scoffed.

The whistleblower suggested there has been a conscious decision by “Remainer Cabinet ministers trying to scare us into swallowing [Theresa May’s] Withdrawal Agreement, and their friends campaigning for a second referendum” — he singled out Amber Rudd’s europhile brother Roland, in particular — to allow scare stories to run unchecked, in order to persuade backbench MPs and members of the public that “we must accept whatever outrageous terms we are offered by an intransigent EU because we are not prepared for no-deal and it would be a disaster.”

“[O]f course no-deal preparations have been made. Very detailed plans have been proposed, assessed, analysed to death and finally agreed by working groups and steering groups and directors’ boards and cross-Whitehall talking shops. They have then been sent to ministers for approval. And they are now being executed,” the official revealed.

“To claim otherwise is to equate the United Kingdom with a tinpot dictatorship where officials tote machine guns,” he added.

Manufacturing Giant JCB: ‘Nothing to Fear’ from No Deal Brexit https://t.co/6rQUekgWl6

The insider said No Deal scare stories were all the more ridiculous for the fact that many of the contingencies for visa-free travel, expedited trade, and so have already been made public — if “surreptitiously”.

“Almost as though the Government didn’t want even its own backbenchers to know…” he added knowingly.

“But if the Government was to be frank with Parliament and the country, what justification would be left for its disastrous Withdrawal Agreement? What would Remainers do without a Project Fear?” he concluded.

“They would need to think up convincing positive arguments for staying in the EU, something that has so far proved beyond them.”