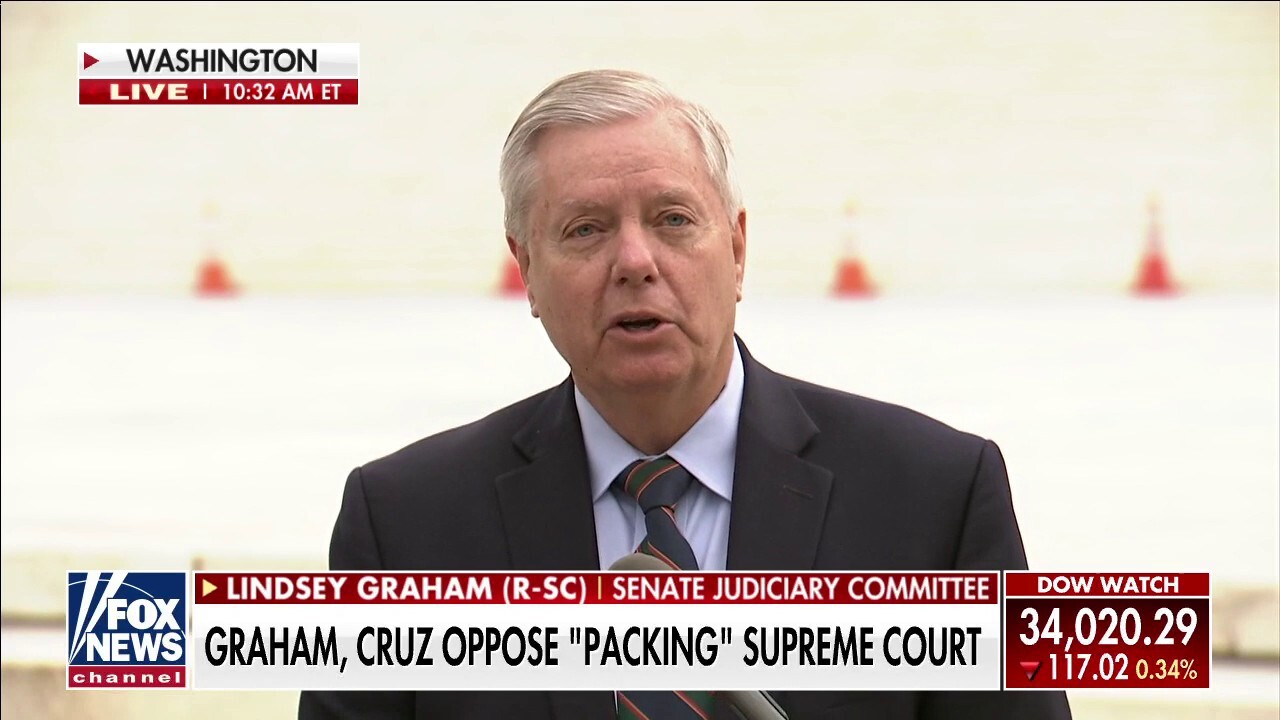 A group of Republican senators on Thursday spoke in front of the Supreme Court in opposition to court-packing, a response to legislation Democrats introduced at a press conference last week to do just that.

Sens. Ted Cruz., R-Texas, Lindsey Graham, R-S.C., and Marsha Blackburn, R-Tenn., railed against court-packing as an effort to “rig” the Supreme Court and pleaded with President Biden to buck “crazies” in his party who support the idea.

“Packing the court and tearing down the institutions that protect our rights is fundamentally wrong,” Cruz said. He said the court-packing plan would “destroy judicial independence.”

HOUSE DEMS SLAM ‘RACIST’ FILIBUSTER BLOCKING ‘EVERYTHING WE LOVE,’ SAY AMERICANS ‘DO NOT CARE ABOUT PROCEDURE’

Graham, meanwhile, noted that former President Donald Trump pressured Republicans to get rid of the filibuster, which many Democrats aim to do so court-packing legislation can pass.

“We were under pressure. President Trump argued every day about changing the filibuster rule so we could get the things that we wanted through and many of us said no,” Graham added.

The South Carolina senator also said that he would use whatever procedural tool he could to ensure Democrats do not pack the Supreme Court.

“If I have to stay in South Carolina to deny a quorum to do this crazy stuff… I will,” Graham said. “If a third-world emerging democracy did this the State Department with all of us would be talking about a puppet government creating a puppet court.”

Democrats, meanwhile, allege that the current state of the Supreme Court is untenable after Trump appointed three justices during his term. Sen. Ed Markey, D-Mass., along with several prominent House members introduced their bill to expand the Supreme Court from nine to 13 justices last week.

“We’re here today because the United States Supreme Court is broken,” Markey said in front of the Supreme Court building, flanked by Democratic lawmakers and activists. “It is out of balance. It needs to be fixed.

The Democrats said the far right has hijacked the court thanks to “norm-breaking” moves by Senate Leader Mitch McConnell, R-Ky., and expanding the number of justices is necessary to restore balance and integrity to the highest court in America.

House Judiciary Committee Chairman Jerrold Nadler, D-N.Y., rejected the notion that Democrats are trying to pack the Supreme Court. He insisted that Republicans did so by blocking Obama Supreme Court nominee Merrick Garland and ramming through Amy Coney Barrett’s confirmation just before the presidential election.

“We’re not packing [the court],” Nadler said. “We’re unpacking it.”

The term court-packing was coined in the 1930s. Former President Franklin Delano Roosevelt, out of frustration with the Supreme Court’s rulings on his New Deal, pushed a plan to increase the number of justices so he could appoint several who would be more likely to support his policies. The term is generally not understood to mean filling or holding open existing judicial vacancies.

House Speaker Nancy Pelosi, D-Calif., said she will not bring the court-packing bill to the floor, a move that would shield moderate House Democrats from being forced to go on the record on the controversial proposal. Sen. Joe Manchin, D-W.Va., and likely some other Senate Democrats, are opposed to packing the Supreme Court too.

Graham and Cruz Thursday called on Biden to rein in the members of his party who are pushing to add justices to the Supreme Court.

“Joe used to be a reasonable guy. The Joe Biden who swore me into the Senate nine years ago, I don’t know where that guy is,” Cruz said. “It’s the crazies who are running the ship.”

Graham added: “I know that the Joe Biden that I worked with all these years would not be a part of this… Something has changed within the Democratic party that needs to be dealt with.”

“I have done that at times with my own party,” Graham said, meaning condemning radical elements of the GOP.

Biden was asked repeatedly during the presidential campaign about his stance on packing the Supreme Court, but said he would not tell voters his position until after the election. More than three months into his presidency, Biden has not said whether he is for or against the idea.

Biden did, however, create a commission that would study packing the Supreme Court, among other potential judicial reforms, with a mandate to provide a summary of the debate to him likely sometime later this year.

Graham Thursday appealed directly to Senate Majority Leader Chuck Schumer, D-N.Y., to consider the consequences if Senate Democrats move ahead with an effort to pack the court.