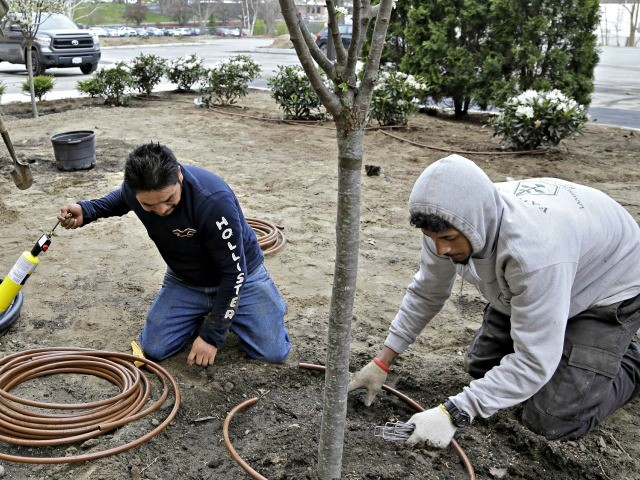 GOP legislators won some extra cheap labor for their donors while letting Democrats insert many anti-wall, pro-migration and anti-enforcement policy riders into the 2019 border spending package.

“They sold out the President and their own voters because the President won’t ever get the 55 miles [of border fence] he wanted,” said Mark Krikorian, director of the Center for Immigration Studies.

Trump “was willing to play ball with Congress and to take less than his full demand [of $5.7 billion], but even on that, they screwed him. The broader public that wants the border enforced also got the shaft in this bill,” he said.

“I don’t think it is because of malice on the part of Republicans,” said Krikorian. “They were duped, they were distracted by [the offer of more] H-2B visa[s] which is what they care about, and by being able to say there is some money for the fence, even if it will never be built,” he said.

The pending bill is being rushed through Congress by GOP and Democratic leaders, but it is being opposed by pro-American groups, including the Federation for Amerian Immigration Reform, ALIPAC, and the small-government Club for Growth.

There’s no coming back from this. No “emergency” or presidential powers will allow him to build the wall, ever, after he signs this bill. Trump has just agreed to fully open borders.

The GOP legislators were duped by Democrats because they wanted to be duped, Krikorian said, adding:

They fooled themselves because they said “We’ve got money for 55 miles of wall, and all the rest are just details and we can’t be bothered with that.”  …  They aren’t interested enough in the details of enforcement to know what [the Democrats were] up to. They just don’t think it is important and they did not focus on it.

The business-first Republicans “keep stepping on rakes and they are surprised every time it happens,” he said. “They will pay a price,” he added.

On Tuesday, Shelby touted the pending bill to Trump, who announced via tweet:

Was just presented the concept and parameters of the Border Security Deal by hard working Senator Richard Shelby. Looking over all aspects knowing that this will be hooked up with lots of money from other sources….

Trump did not say if Shelby told him about the paragraph which gives Texas Democrats a veto on the $1.4 billion on wall spending until September 2019.

The cheap labor H-2B expansion sought by Republicans was added in the last ten pages of the 1,169-page border security bill, and it pressures the Department of Homeland Security to raise the annual inflow of cheap H-2B workers, which are used to cut pay to seasonal and full-time employees by the owners of resorts, hotels, landscapers, and forestry companies.

Notwithstanding the numerical limitation set forth in section 214(g)(1)(B) of the Immigration and Naturalization Act (8 U.S.C. 1184)g)(1)(B)), the Secretary of Homeland Security …may increase the total number of aliens who receive a visa under section 101(a)(15)(H)(ii)(b).

The business groups pushed hard for the cheap labor because they are being forced to raise wages to Americans amid Trump’s booming economy and his “Hire American” low immigration policy. In 2013, nationwide wages rose by three percent. Wage raises were low in areas with lots of migrant workers but were higher in areas with fewer migrants. For example, wages rose in the Minnesota region by 5.2 percent.

Conference Report to H.J. Res. 31 would nearly double the available FY 2019 H-2B low-skill visas. Wages in H-2B industries have only barely begun to increase after many years of stagnation. Americans need jobs and a raise!

Tell your Senator to vote NO.https://t.co/gidlDsKVmU

Republicans have worked with Democrats and business allies to import a resident population of roughly three million cheap visa workers. Roughly 1.5 million of the visa workers work in white-collar jobs sought by U.S college graduates. Those 1.5 million visa workers will accept less pay than U.S. workers, partly because they hope to get a deferred bonus of green cards from the U.S. government.

The Democratic wins in the 2019 spending package include a de-facto amnesty for migrants who say they will “sponsor” the teenagers and children who are being smuggled to the U.S. border by cartel-backed coyotes. That section of the law creates a legal reward for Central American illegals who smuggle their own children into the United States.

“If this bill is enacted, expect the largest surge of unaccompanied minors this country has ever seen. If this bill is passed by Congress, President Trump must veto it.” – Dan Stein, president of FAIR. https://t.co/6GEW7xAMWQ

The Democratic wins also deliver hundreds of millions in spending to encourage migrants to cross the border, plus rules which constrict and stigmatize ICE enforcement.

In contrast, “there are no policy wins for people who are concerned about controlling the border,” said Krikorian. “None.”

There is no evidence, Krikorian added, that GOP staff experts on immigration were allowed to advise the GOP members of the spending panel.

Democrats win these closed-door immigration fights because they really want to expand immigration, while the business-first Republicans really want to aid donors and are not interested in developing an immigraiton policy which helps ordinary Americans, he said, adding:

Gallup reported in February 2019 that five million Central Americans want to move to the United States in 2019.

The 2019 border security bill gives Trump & GOP an apparent win on the border wall $ — but it also chokes ICE enforcement with a wide variety of curbs, rules and exemptions while it also encourages offers of migration with offers of aid and lawyers. https://t.co/DfZZJE3SwN