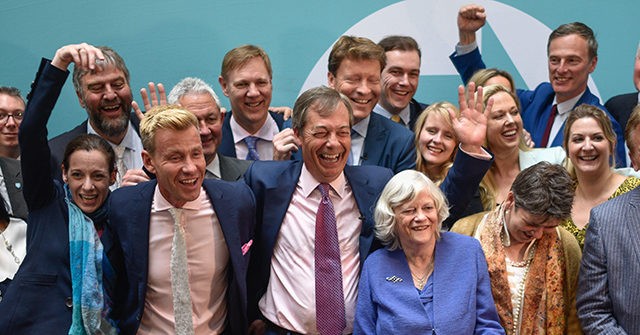 European Union elections victor Nigel Farage has hailed the arrival of social media as the agent of change which has facilitated the rise of the Brexit Party, which went from foundation to becoming the joint-largest political party in Europe in just 45 days.

Going from a victory rally in central London where Mr Farage met for photographs with his fellow 28 Brexit Party Members of the European Parliament — an achievement which has seen his newly minted political party become the joint-largest political party in Europarl alongside Angela Merkel’s CDU — Mr Farage hosted a show on Britain’s LBC talk radio.

We’ve had to move the press conference due to the amount of press! pic.twitter.com/QoaEsGZl8w

Addressing the factors which contributed to the sudden and massive rise of the Brexit Party, which polled ahead of even his former party UKIP at the last EU elections despite that party already being 20 years old at the time, Mr Farage pointed to social media as a key driver. As a space where individuals can become curators of their own newsfeeds rather than getting information through the mainstream media gatekeepers as a primary reason for the pace of change, Mr Farage said:

In the modern world, politics can change incredibly quickly. It took the Labour Party 45 years from their birth to becoming a majority government. It took the Brexit Party 45 days from its launch to become the largest party in a national election. How come? Social media.

Social media, the use of video, has changed absolutely everything. Don’t be surprised if you see further big changes in politics… The two parties who have absolute dominated politics since 1918, Labour and the Conservatives, they are both in real trouble…

Mr Farage also took aim at the media narrative dominating the news-scape after Sunday’s results, which have claimed a victory for pro-remain parties despite the Brexit party — which favours the United Kingdom leaving the European Union as soon as possible — enjoying a decisive victory.

Expressing his surprise at the shifting goalposts in British politics, Farage continued:

…normally elections are won by the party with the highest number of votes and the most seats, at least that is what I thought until this morning when they tried to reinvent all of this.

Farage Declares ‘This Is Just the Beginning’ After Brexit Party Victory in EU Elections https://t.co/63ftJKVD7y

This is a theme also touched upon by freshly elected Brexit party MEP Ann Widdecombe, who told the BBC in the early hours of Monday morning after the results came in and the pro-remain “spin machine” cranked into action, that: “we came first, whether you like it or not!”

Addressing the claims that a pro-remain coalition of parties — who are not in a coalition and campaigned against each other in the vote — had beaten the Brexit Party, Brexit victor Farage said:

…we’re at 52-48 in favour of leave, nothing has really changed. If we had a second referendum, not only would that be a huge insult, not only would it be totally anti-democratic to have another vote before you’ve implemented the first one, but here’s the problem.

This parliament wouldn’t listen to a second leave vote. If we’re going to get Brexit, we’ve got to change the people who are sitting in Parliament. They aren’t reflecting the country. Three-quarters of these MPs were remain voters the first time around and that is still their instinct.

The Brexit Party has demanded a place on Britain’s negotiating team to help deliver Brexit, taking the United Kingdom out of the European Union. Farage used the party’s victory in Sunday night’s elections to warn the British political establishment that if they failed to deliver Brexit, they could expect a similar upset in the general elections.

Breitbart London reported his comments Monday when he said: “[Leaving the European Union in October] will become a bigger factor in peoples’ minds as these five months go by. If we don’t leave on the 31st of October, then the Brexit Party will go on to a General Election and stun everybody there, too.”

Delingpole: Farage Is Starting to Look Like the British Trump https://t.co/JIFMClb6aW