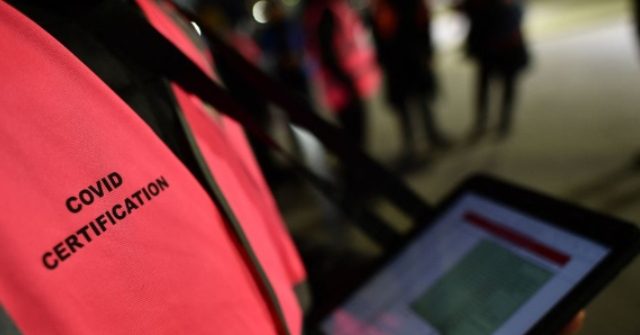 Fans of the Los Angeles Rams will be required to provide proof of vaccination or a negative test to attend the team’s Super Bowl Championship outdoor parade on Wednesday, mere days after pro-restriction elitists, such as Los Angeles Mayor Eric Garcetti (D) and plenty of celebrities, failed to apply the rules to themselves yet again, forgoing masks at the game as their latest public display of hypocrisy.

Fans who seek to celebrate the Rams’ 23-20 victory over the Cincinnati Bengals by attending the mile-long parade, which begins at the auditorium and ends outside the LA Memorial Coliseum, must provide proof of vaccination or a negative antigen test taken within 24 hours of the outdoor event. Officials also gave fans an option of providing a negative PCR test within 48 hours of the parade.

Here’s the video of every celebrity without a mask during the Super Bowl. But every kid in California will have to be wearing them tomorrow in school. They must all be holding their breaths the entire game. pic.twitter.com/Dc9yVd7RPf

Pro-mask Los Angeles Mayor Eric Garcetti (D) also defied the rules he routinely thrusts upon the people of his city, gleefully forgoing a mask at the game despite Los Angeles County requiring individuals to wear masks at “mega-events”:

I mean, how many times are they gonna do this? Unbelievable. https://t.co/1oRFkXQ3x8

Notably, onlookers caught Garcetti maskless last month, as well as he posed for a viral photo with NBA legend Magic Johnson at the Rams game. Neither was wearing a mask in the picture, but the Democrat’s excuse, specifically, went viral.

“I’ll take personal responsibility, and if it makes you and everyone else happy — or even the photographs with people where literally I’m holding my breath for two seconds — I won’t even do that,” Garcetti said, adding, “When people ask for a photograph, I hold my breath”:

Johnson also snapped pictures with Democrats California Gov. Gavin Newsom (D) and San Francisco Mayor London Breed (D), both of whom were not wearing masks either. However, it is not the first time either of them had been caught violating their own purported beliefs. Last year, for instance, onlookers spotted Breed partying at a club without a mask on, violating her city’s rules which required “almost everyone” to wear a face-covering in indoor public areas. She later defended her night out, asserting that individuals do not need the “fun police” out there to “micromanage” people. Meanwhile, these same Democrat politicians and their elitist friends continue to advocate forced masking on children in schools.