Wayne, a demonstrator supporting the Freedom Convoy in Ottawa, ON, told Breitbart News on Saturday that families are being “destroyed” by divisions related to the politics of COVID-19.

He said his sister was “brainwashed” into supporting “lockdowns” as a necessary “medical” measure in the context of COVID-19.

Breitbart News invited Wayne to make some remarks on Prime Minister Justin Trudeau’s repeated denigration of Canadians opposed policies as a “fringe minority” of “anti-vaxxer mobs” who engage in “racist, misogynistic attacks.” Trudeau impugned the intelligence of those rejecting vaccinations, saying they are “very often misogynistic and racist.” 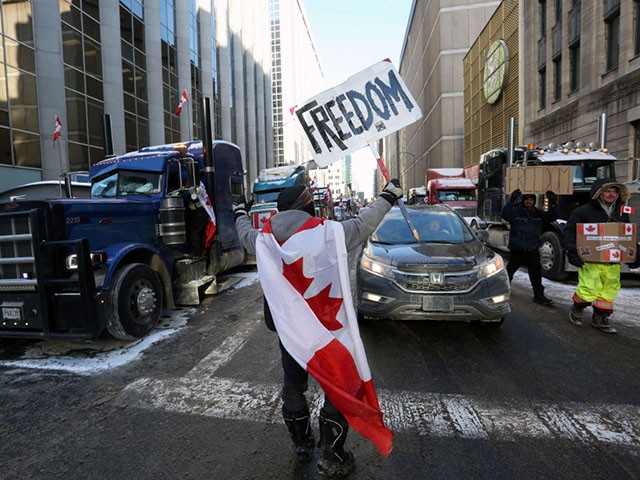 A person holds a sign reading “Freedom” as truckers and supporters continue to protest against mandates and restrictions related to Covid-19 vaccines in Ottawa, Ontario, Canada, on February 5, 2022. (Photo by DAVE CHAN/AFP via Getty Images)

“I know people who are about to or have lost jobs,” he added. “When you lose a job, it’s devastating.”

Wayne said he came to the nation’s capital to experience the demonstration firsthand without news media filters.

“It’s about time,” he said of the demonstration against governmental restrictions against human rights marketed as “public health” measures. “People can’t live in fear. They can’t be isolated. They can’t suffer from isolation and being alone, and also being stigmatized for a personal decision that should be nobody else’s business.”

Maskless faces among most Freedom Convoy truckers and supporters were a pleasure to see, he concluded.