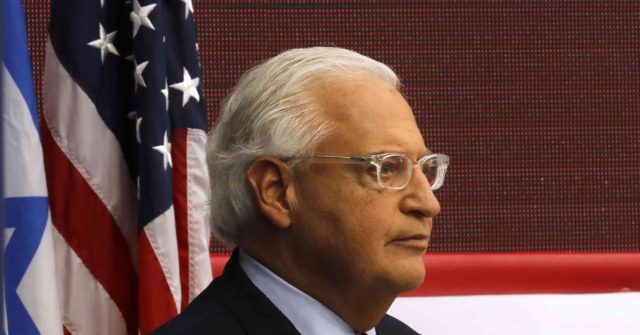 A senior staffer at the State Department told then-U.S. Ambassador to Israel David Friedman in 2017, “Don’t be so Jewish.”

Friedman reveals the antisemitic episode in his explosive new memoir, Sledgehammer: How Breaking with the Past Brought Peace to the Middle East, set to be released on February 8 by HarperCollins. In the book, Friedman tells the story behind President Donald Trump’s diplomatic success in the Middle East — and how achieving it required smashing old prejudices.

The context of the remark was Friedman’s urgent preparations for President Trump’s first visit to Israel and the Middle East in May 2017. Trump had promised to move the U.S. embassy to Jerusalem, but there was fierce internal opposition within the government. As Friedman tried to push State Department legal advisers to accept the recognition of Jerusalem as Israel’s capital as an interim first step, he faced strong pushback: Secretary of State Rex Tillerson would not even take his phone call.

Friedman then took a different approach. Upon his arrival in Israel, he insisted that he and his wife be taken directly to the Western Wall, the holiest site in Judaism, in Jerusalem’s Old City. (While there, he notes, he met with Steven Tyler, Joe Perry, and Joey Kramer of Aerosmith, who were performing in Israel.) Ultimately, Friedman would help arrange Trump’s visit to the site, which made him the first sitting U.S. President to do so, a gesture toward recognition of Israel’s sovereignty there.

He describes the reaction from career officials in the “deep state” of the State Department bureaucracy:

Word of my stubborn insistence on standing with our ally Israel had now circulated widely within the State Department. Another senior staffer decided to call me and offer the following advice: “Mr. Ambassador, don’t be so Jewish.”

“Don’t be so Jewish. You represent the United States of America. Tone down the Judaism in your work.”

Don’t be so Jewish.

I was furious. “Do you think I am under any disillusion as to who I represent? I’m not a politically correct person but I have to ask you, why do the laws of political correctness not apply to Jews?”

“Just a free word of advice.” Worth the price.

Ultimately, Friedman’s religion was an asset, not a burden, as he used the Biblical figure of Abraham — a founding father of Judaism, Christianity, and Islam alike — to cement the Israeli-Arab peace agreements known as the Abraham Accords.

Sledgehammer is the first book to document the diplomatic breakthroughs that led to that historic peace deal, which remains strong and has established new political, economic, and cultural ties between the Jewish State and many of its Arab and Muslim neighbors.

Along the way, Friedman and the Trump White House had to battle the deep state — and even some of Trump’s own senior appointees. When he arrived at a meeting with National Security Advisor H.R. McMaster, for example, to discuss the pros and cons of moving the embassy to Jerusalem, he found that McMaster had listed only the cons and none of the pros. In the end, the embassy move was successful: far from hurting U.S. interests, it helped usher in a new era of Mideast diplomacy.

Friedman relives his confirmation battle, and his confrontations with Democrats — those on the left, who wanted to move U.S. policy in an anti-Israel direction; and those in the middle, who professed to be pro-Israel but failed to turn up at the embassy opening.

He notes that his difficulties with the State Department ended with the appointment of Mike Pompeo as Secretary in 2018.

The book aims to provide a definitive historical record of the Trump administration’s policy toward the Middle East, and offers recommendations to keep a new U.S. administration from undoing Trump’s remarkable progress.