At least 117 people died this week in floods and landslides that swept through the historic mountain city of Petropolis north of Rio de Janeiro, the Associated Press (AP) reported Thursday.

Local government officials in Petropolis said on February 17 the town’s death toll from the natural disaster “could still rise sharply, with 116 more still unaccounted for.”

Record rainfall caused torrential flooding and subsequent landslides to rip through Petropolis this week, washing away hundreds of houses and burying others in mud. Aerial footage recorded over Petropolis by Agence France-Press (AFP) on February 16 showed a giant strip of earth running vertically through the mountainside city where homes and roads once stood. Petropolis experienced the most severe weather on Tuesday. The city recorded the equivalent of one month’s average rain (over 10 inches) within a six-hour time span on February 15, marking the greatest amount of rainfall Petropolis has received since 1932.

“Torrents of floodwaters and mudslides dragged cars and houses through the streets of the city Tuesday during the most intense rainfall in decades,” the AP recalled on Thursday.

One eyewitness video of Tuesday’s flood circulating on social media showed two buses — seemingly filled with riders — swept away by a torrent of water that overtook a local street in Petropolis.

The video captures harrowing moments before the buses are enveloped by the muddy torrent. Some passengers climb out of the windows of the buses onto the top of the vehicles only to find they have nowhere to go. The buses and passengers are soon swallowed by the unforgiving floodwaters and disappear from sight. 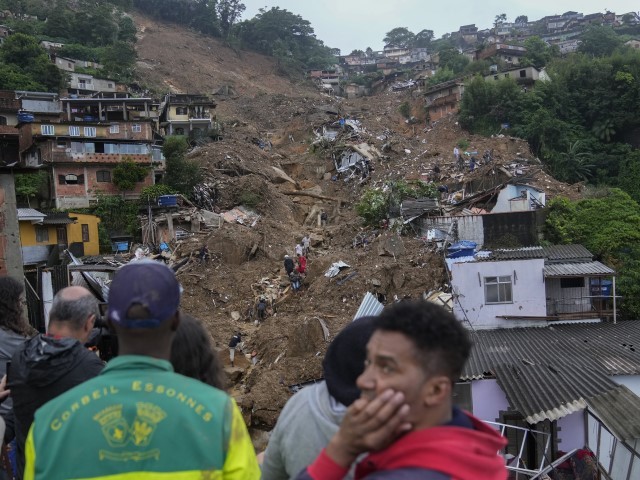 Rescue workers and residents look for victims in an area affected by landslides in Petropolis, Brazil, Wednesday, Feb. 16, 2022. (Silvia Izquierdo/AP)

“The situation is almost like war,” Rio de Janeiro Gov. Claudio Castro told reporters on February 17, describing the aftermath of the flooding.

“Cars hanging from poles, cars overturned, lots of mud and water still,” Castro said of the scene in Petropolis on Thursday.

The mayor of Petropolis declared three days of mourning on February 16 in the wake of the deadly mudslides, which displaced more than 400 residents. Brazilian President Jair Bolsonaro said Wednesday he would release federal funds to Petropolis to aid the city’s recovery from the natural disaster.

“We intend to already offer to the mayor what we can,” Bolsonaro told reporters in Moscow on February 16.