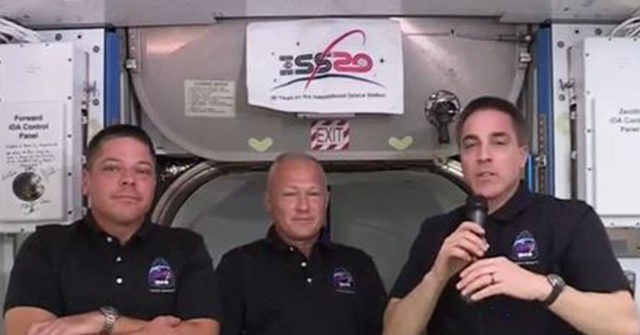 Astronauts Chris Cassidy, Bob Behnken, and Doug Hurley held a press conference with reporters from the International Space Station (ISS) on Monday after Behnken and Hurley rode aboard the SpaceX Crew Dragon spacecraft launched from U.S. soil for the first time in nine years — a historic flight and one that marks a new era for the U.S. space program.

Cassidy, who is the commander on the ISS Expedition 63, recalled what it was like to see the spacecraft approaching the space station.

“When we were watching the vehicle do its stair step maneuver up to our altitude … we saw it very far away — about 19, 20 kilometers,” Cassidy said. “And then it got brighter and brighter and bigger and bigger, and it struck me that that little tiny dot was going to be fixed to a piece of metal that was about 15 meters from where I was standing, so to speak.”

“And then they came up to our same altitude and started coming directly into the docking access,” Cassidy said. “I realized that inside that spacecraft were two of my colleagues and friends, and they’re going 17,500 miles an hour, and we’re going 17,500 miles an hour, and we are bringing these two vehicles together with a computer and them backing it up.”

“From a technical nature I was pretty amazed at the whole thing, just realizing what was happening,” Cassidy said. “But then you fold into that the historic aspect of the whole day and what it means it means to America, what it means to our space program.”

“What it means it international cooperation and commercial cooperation, it just was kind of awe-inspiring,” Cassidy said. “It was a pretty impressive day, and I’m just honored to be a part of it.”

Behnken said the best part of arriving at the space station was getting to speak with his family, including his six-year-old son who was in Florida to see his dad’s launch.

“He’s excited that we’re going to get a dog when I get home,” said Behnken, whose wife is also an astronaut.

A reporter asked Hurley and Behnken about what happened to the American flag they hung at the ISS when the duo flew there aboard space shuttle Atlantis in 2011, the last time a flight was launched from U.S. soil.

Hurley said the flag is still there and represents the new “launch capability in the United States.”

“We’re lucky to bring it home with us,” Hurley said.

NASA has not announced how long Behnken and Hurley will be aboard the space station. It could be weeks or months, the astronauts said.

The return from the ISS will be another test of this new era of U.S. space flight, including the performance of the Dragon, a joint operation of NASA and Elon Musk’s Space X private sector spacecraft manufacturer.