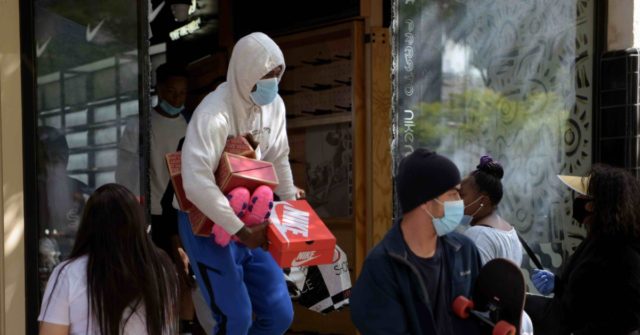 The New York Times described Sunday’s nationwide riots as a wave of police violence against “protesters and bystanders,” even as law enforcement abandoned large urban areas to rioters and looters who ran amok for hours.

An article late Sunday night declared: “Facing Protests Over Use of Force, Police Respond with More Force.” It featured an image from last Monday’s arrest and killing of George Floyd in Minneapolis, Minnesota.
But across the country, Americans were confronting a horrific landscape of downtown retail districts being destroyed by mobs Sunday as police did nothing to intervene.

In Santa Monica, California, police kept watch over a “Black Lives Matter” demonstration on the oceanfront, while looters destroyed the city’s main mall one block away. In Philadelphia, police retreated from a line of parked vehicles as young men smashed them, slashed their tires, and set them alight.

To the Times, however, what happened was more akin to a police riot. “Videos showed police officers in recent nights using batons, tear gas, pepper spray and rubber bullets on protesters, bystanders and journalists, often without warning or seemingly unprovoked,” the Times reported, without providing any context for these incendiary accusations.

To the extent the Times created space for explanations, it was for claims that the protests had begun peacefully. A city council member in Minneapolis was quoted as claiming that there had been no looting or burning on the first night of the protest, and that police were to blame for subsequent events because they were “incredibly brutal” in response.

The Times cited a criminal justice professor at Michigan State University who claimed that Baltimore, Maryland, had been spared the worst effects of anti-police protests in 2015 because the city gave room to demonstrators to protest.

That would certainly come as news to residents, who remember the city being all but abandoned to rioters while then-President Barack Obama dined with reporters at the White House Correspondents’ Dinner just 50 miles down the road.

The Times‘ report suggests an ongoing war over political narratives, including on the news pages of the “paper of record.”