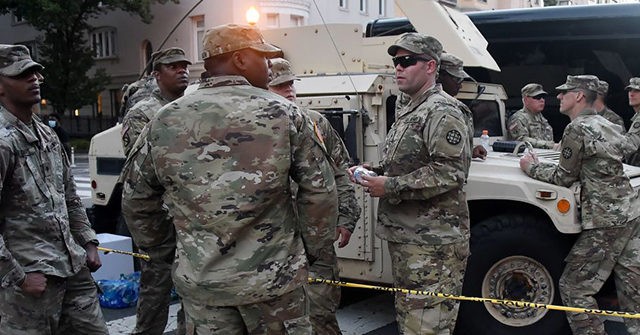 Army Secretary Ryan McCarthy and commander of the District of Columbia National Guard Army Maj. Gen. William J. Walker defended the use of National Guardsmen in Washington, DC, last week amid criticism from the left over their deployment, during a press briefing on Sunday.

“Sunday evening … we had five soldiers hit in the head with bricks. One of which has a severe concussion, the other four — all five of them were treated at the hospital. One of them … was sent home,” he said, adding that the park in front of the White House got “very violent.”

“It got very violent down in the park in particular. [Police said] it was the most violent they’d ever seen it in the city, and we needed to put additional support down there to ensure we could enable peaceful demonstration and prevent another evening like we had Sunday night,” he said.

Walker said that protesters on Sunday were “armed with cylinder blocks.”

“I had a soldier that had a concussion. There were bags of bricks,” he said.

On Monday, he said, they threw frozen water bottles, eggs, and fireworks.

“There were also fireworks being thrown at our soldiers and airmen. So I think they displayed enormous courage, discipline, and restraint,” he said.

Walker, who is African American, said the D.C. National Guard only had 250 members supporting different law enforcement agencies on Sunday night during the apex of violence in the city:

We went from 250 on Sunday to over 1,500 supporting a variety of different organizations over the course of the week after all of the violence on Sunday evening, as well as the defacing of the Lincoln Monument, the burning of St. John’s church, the burning of the technical building in Lafayette Park, the defacing of Veterans Affairs and the Treasury Department, among others, and I think stores were looted down there.

Stores were looted. Think about if something were to happen to the Dr. King Memorial. Just let that process, what that might have done to exacerbate the situation. The African American museum. So we were dealing with a thin force already; we had to quickly look bigger than we actually are.

Their defense came after reporters questioned them whether they regretted deploying the National Guard in D.C. last week, or regretted that National Guardsmen assisted federal law enforcement in clearing Lafayette Park.

McCarthy said on that Sunday evening, the security at the White House were almost “overwhelmed.” He said:

The Park Police required additional support, and we wanted to provide that capability to support them. On Sunday evening the security elements were almost overwhelmed, and you had buildings damaged and defaced, they were lit on fire, and people trying to get to the fence. Clearly they were needed.

McCarthy said from about Sunday to about Wednesday, there were 437 arrests made by the Washington Metropolitan Police Department.

“That’s a lot of arrests — more than any inauguration or anything you’ve seen in recent memory, and a lot of them were just these violent actors,” he said.

Walker said defending the nation’s Capitol is part of the D.C. National Guard’s mission and what they are trained to do:

The District of Columbia National Guard has protected the Capitol and defended the nation since 1802. That is part of our foundational mission. So on that night, my soldiers and airmen were defending the nation. We were defending the Capitol. And we were the last line of defense. So the United States Park Police, the United States Secret Service were in front of District of Columbia Guardsmen. And on a couple of occasions, they penetrated the line, and our Guardsmen, Army and Air, held the line and kept people from advancing on to the White House proper.