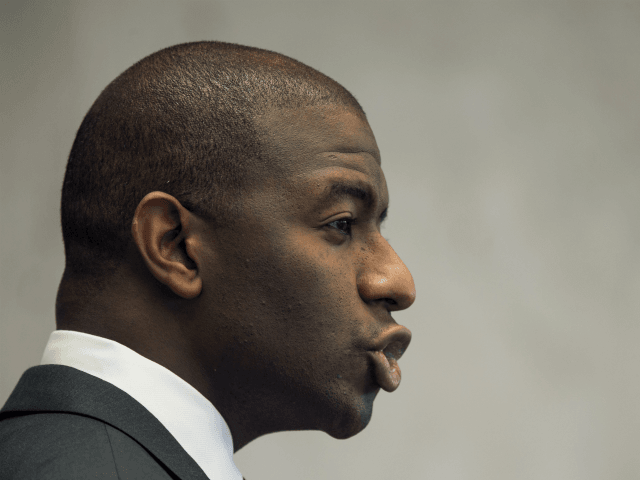 NEW YORK — An organization that has a close relationship with Florida Democratic gubernatorial candidate Andrew Gillum calls for an “end” to “disaster  capitalism,” rants against Independence Day and spreads malicious falsehoods about Israel.

Dream Defenders Co-Director Phillip Agnew recently described a long and close working and personal relationship with Gillum and said he considers Gillum to be “part of the movement.” Dream Defenders Action Fund, the electoral and c4 nonprofit arm of Dream Defenders, was part of a progressive coalition that reportedly committed $3.5 million to help Gillum win the Democratic primary against Gwen Graham.

Gillum and Dream Defenders’ Agnew are so familiar with each other that while he was a city commissioner in Tallahassee, Gillum himself penned a glowing profile promoting Agnew and the activist’s work founding Dream Defenders titled, “We need more Phillip Agnews.”

Gillum, who would go on to become Tallahassee mayor, gushed in the March 2014 profile: “We must learn from the successes of young leaders like the Dream Defenders and recruit, train, and connect thousands more local organizers and activists, particularly in underrepresented communities and regions of the country.”

A simple perusal of the website of Dream Defenders, the organization so feverishly championed by Gillum, evidences the open radicalism of the group.

The main page boasts that Dream Defenders is “building a powerful, deep, local, organization and movement for freedom and liberation in Florida.”

Dream Defenders touts a mission statement in the form of “Freedom Papers” stressing “police and prisons have no place in ‘justice,’” while calling for an “absolute right” to fully-funded free public education.

The “Freedom Papers” advocate textbook socialist principals such as claiming that “by virtue of being born each of us has the absolute right to adequate food, shelter, clothing, water, healthcare, effective public transportation, dignified work, living wages.”

Independence Day in America should be utilized “to illuminate the ‘immeasurable distances’ between U.S. citizens and the harm committed in our name around the world,” the organization advocates. “What to the prisoner is the fourth of July?” Dream Defenders asks. “The indigenous people who were here before white settlers?

The anti-patriotic posting goes on to call for an end to “disaster capitalism” and the total abolition of the U.S. Immigration and Customs Enforcement (ICE) agency while lamenting U.S. military aid to Israel:

Why is there enough money to bomb Iraq, Yemen, Sudan, Syria, Pakistan, Afghanistan, Somalia, but not enough to support the self determination of migrants and refugees fleeing the very violence the U.S. has inflicted? Why is there enough money to sign contracts with private prison corporations like CoreCivic and GEO Group for hundreds of millions of dollars, but not enough money to rebuild Puerto Rico? Why are there billions of dollars allocated to Israel’s military to kill unarmed protestors but not the same investment to clean Flint’s water supply? The consequences of normalizing the immense violence perpetuated under the banner of U.S. exceptionalism ripple far and wide. We are all harmed by the racist misallocation of resources in America towards never ending extraction and destruction. We mourn for all of the lives lost this year serving the war machines.

“The consequences of normalizing the immense violence perpetuated under the banner of U.S. exceptionalism ripple far and wide,” decries the organization. “We are all harmed by the racist misallocation of resources in America towards never ending extraction and destruction. We mourn for all of the lives lost this year serving the war machines.”

Dream Defenders strongly supports the extremist Boycott, Divestment and Sanctions (BDS) movement targeting the Jewish state. Its website labels the entire State of Israel as the “continued settler colonial project.” It pushes the false charges that “Israel was declared on top of stolen Palestinian land, with Zionist militias committing massacres and forced evictions, then immediately ethnically cleansing over 750,000 Palestinians from the lands, and internally displacing thousands more.”

Stated Goodman: “In 2013, Andrew Gillum was a city commissioner in Tallahassee when Agnew and the Dream Defenders led the takeover of the state Capitol to protest the acquittal of George Zimmerman in the shooting death of unarmed teenager Trayvon Martin. Gillum supported their direct action. The next year, Gillum was elected mayor.”

“Agnew and the Dream Defenders have also worked to support Andrew Gillum in Florida’s governor’s race.”

Agnew told Goodman that Gillum’s victory could be used to “move” Florida to a “radical platform.”

Well, it’s Gillum’s victory. It’s also the fact that in November we’re going to have the opportunity, led by formerly incarcerated people, to bring the franchise back to 1.4 million people that have had the right to vote stolen because they have a felony conviction in a racist state. And so, Gillum’s nomination and eminent candidacy and the right to vote for 1.4 million people in the state of Florida tells us that we have the opportunity in 2020 to change the state that went barely red for Donald Trump, that Rick Scott won by 60,000 votes four years ago. We have the opportunity to make a model here, and one — as the state goes, the country goes. And we have an opportunity, with those 1.4 million people, with the election of Andrew Gillum as governor, to turn this state blue, and then to move a radical platform as we look to 2022 and 2024 and the next 20 years in the state.

Agnew recalled first meeting Gillum in 2003 when the two were both student leaders at Florida A&M University and Agnew says he watched as Gillum led activism at the time in support of affirmative action. He said that Dream Defenders was founded on Gillum’s “model” and that he sees Gillum as part of the movement.

“So, in 2012, when we start this organization, it is really with a model of what Andrew has led for many, many years in the state,” Agnew stated. “We like to say Andrew Gillum isn’t a friend of the movement, he is a part of the movement.”

The group took credit for Gillum’s victory against Graham in the primary.