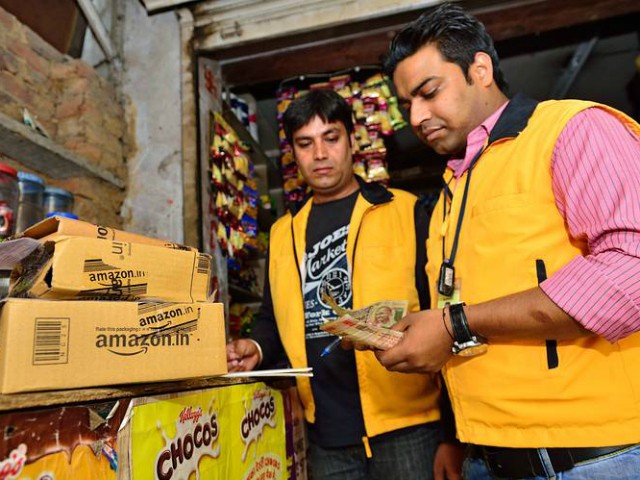 Amazon India will reportedly abide by new government requirements that all its products indicate where they were manufactured, reports indicated on Wednesday, a policy implemented following the surge of a national movement to boycott Chinese products.

Indian activists organized boycott campaigns, protests, and burnings of Chinese dictator Xi Jinping in effigy after a clash last month in which Chinese People’s Liberation Army (PLA) soldiers attacked Indian troops with rocks and sticks wrapped in barbed wire. The Indian soldiers had confronted the Chinese about their illegal presence in Chinese territory. Indian authorities confirmed the deaths of 20 soldiers, while the Chinese Communist Party has refused to reveal its casualty count. Indian officials claimed over twice as many PLA soldiers died as Indians, a claim Beijing denied but did not respond to with its own numbers.

Amazon’s decision to implement the “country of origin” label policy, as well as reports of some of the world’s largest companies announcing large investments in the country, indicate that Prime Minister Narendra Modi’s nationalist “make in India” initiative and increasingly public challenge to China’s global manufacturing supremacy are not intimidating corporations out of cooperating with New Delhi.

The Times of India reported on Wednesday that Amazon India contacted its sellers with a message giving them until August 10 to label the origin of all products they sell on the website.

“Starting July 21, 2020, we are introducing ‘country_of_origin’ as a mandatory attribute in addition to a few optional attributes in our category listing templates in accordance with the Legal Metrology Act of 2009,” the Amazon India message to sellers read, according to the Times of India. “You will be required to provide information for ‘country of origin’ mandatorily for all your new and existing listings.”

The message concluded that Amazon would remove products from the site that did not specify where they were manufactured.

The Indian government announced last week that it would require all online retailers to indicate to sellers where the products they sell came from. India’s Zee News reported that penalties for not complying could be up to 100,000 rupees ($1,330.79) for repeated offenses or a prison sentence of up to one year. The implementation of this requirement followed the government’s call to sellers using the Government e-Marketplace (GeM), a website maintained by the Indian government to help domestic sellers engage consumers, to do so on that site. The GeM site boasts a filter that allows buyers to search for only products made in India.

Rather than limiting investment in India due to new regulations, some of the world’s largest corporations appear to be investing more heavily there. This week, Walmart announced a $1.2-billion investment into Flipkart, an online retailer it owns a majority stake in that has also moved to place country of origin labels on all available products.

Google, meanwhile, announced a $10-billion investment in activities in India this week, including business projects and infrastructure.

“India is setting itself up to be a testing lab for what the U.S. might do if China relations continue to worsen,” Forbes assessed last week, referring to the new policies favoring Indian companies and making Chinese penetration of the Indian market more difficult.

In addition to the “make in India” campaign and the country of origin label mandate, India announced shortly after the clash between its troops and China’s that it would ban 59 mobile and online applications made in China from being used in India, including highly popular social media applications like WeChat and Tiktok. The applications, Indian officials asserted, posed national security risks as Chinese companies are compelled by law to cooperate with the Communist Party, including sharing the private data of users. Australia, America, and the United Kingdom have raised similar concerns about Chinese applications and telecommunications companies stealing data from its citizens.

Some government leaders in the United States have called for similar policies on imports as India’s. Indian groups, along with allies in the Tibetan community in the area, organized a protest in Times Square this month urging Americans to join India’s “boycott China” movement, citing the widespread evidence of human rights abuses China perpetrates against its people, particularly ethnic minorities like Tibetans and Uyghurs. Sen. Rick Scott (R-FL) sent a letter this week to major retailers urging that they provide country of origin information to consumers in America, as well, echoing the demands of the Indian government.

“To protect our families, Americans need to know where the products they buy online are made. As the largest online retailer, Amazon has an opportunity to lead this effort, and I was pleased to learn that Amazon will be requiring third-party sellers on its U.S. marketplace to publicly disclose their business name and address,” Scott wrote in a letter to Amazon boss Jeff Bezos.