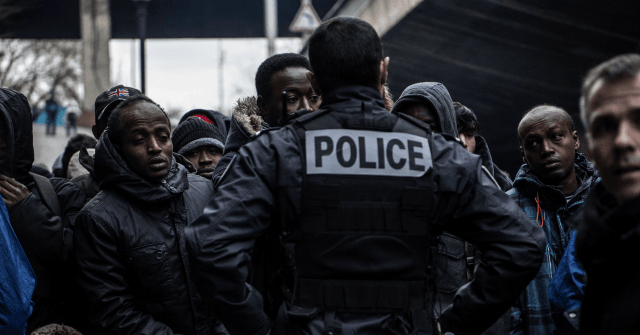 A homeless migrant from Afghanistan was arrested over the weekend after attempting to kill a Paris police officer with a shard of glass following a brawl.

The incident took place on Sunday evening in the 18th arrondissement of Paris and saw around ten people, some armed with wooden weapons, brawl with each other before plainclothes police officers attempted to break up the fighting, Le Parisien reports.

As the officers proceeded to calm the situation, a 19-year-old homeless Afghan migrant, who was in a state of intoxication, broke a bottle on a pole and rushed one of the officers with a shard of glass in an attempt to kill him.

The officer managed to dodge the attack but was unable to subdue the migrant, even after deploying his baton. Another officer then sprayed the migrant with tear gas, which also had no effect on the Afghan.

One of the officers then proceeded to draw his firearm, which caused the migrant to drop the shard of glass and attempt to run from the scene. The officers soon caught up to the young man, detained him, and placed him under arrest for attempted homicide of a police officer.

The case comes only a week after residents of the 18th arrondissement said they felt abandoned by the local government as violent crime and drug crimes have become increasingly prevalent in the area.

Colombe Brossel, security advisor to Paris Mayor Anne Hidalgo, wrote about local residents and their experiences to French Interior Minister Christophe Castaner saying: “A young woman with a tiny baby looked me in the eye and said: ‘When I get out of the subway, there are 200 metres to go, and I am harassed. I do not want to see my child grow up in this environment.’”

The rise in crime and insecurity has also affected business owners, forcing some to close their doors.

“This restaurant was my life, my story… But I’m worn out. What do I do when knives fly around customers? When they have lunch on the terrace two metres away from drug traffickers?” a local restaurant owner said.

In one particularly violent incident in April, a Moroccan migrant stabbed eight people in the La Chapelle area but was so intoxicated he could not tell police why he had even committed the crimes.