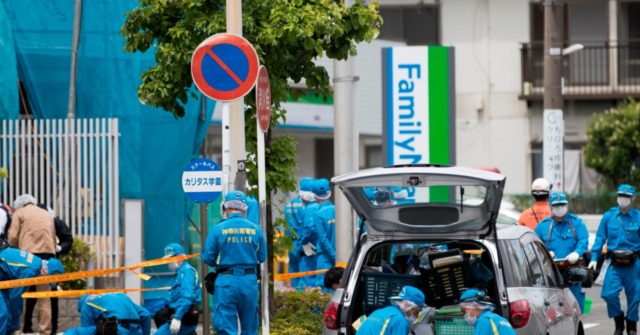 Police in Japan believe a 51-year-old man went on a stabbing spree early Tuesday morning in Kawasaki, less than 20 miles from Tokyo, near an elementary school, killing an 11-year-old girl and a 39-year-old man.

Japanese media are reporting that another 16 people were injured in the attack and being treated in a local hospital. Three of those – described as “a woman in her 40s and two elementary school girls” by the Japanese newspaper Mainichi Shimbun – are reportedly in grave condition.

Authorities have not revealed any motive for the attack or the identity of the man they believe is responsible, though they have confirmed to local media that the prime suspect stabbed himself in the neck as police attempted to detain him. Broadcaster NHK reported that the man appeared to be in his 40s or 50s but provided no further details.

Asahi Shimbun identified the suspect as “a 51-year-old resident of Kawasaki’s Asao Ward.” The newspaper quotes witnesses who say they saw the man begin slashing people with two knives outside of a bus stop near Caritas Elementary School, a Catholic institution, while yelling “I will kill you!” He attacked a line of schoolgirls who were boarding their bus to school at around 7:40 a.m. local time, witnesses said.

“I looked toward the bus stop when I heard kids screaming,” an eyewitness told Asahi. “I saw a man holding two long knives in each hand. Afterward, he stabbed himself in the neck and fell down.”

The driver of the bus the girls were boarding told Mainichi that he saw the suspect had “suddenly started stabbing children lining up to get on the bus.” He stabbed himself in the next after the driver yelled “what are you doing?”

Asahi identified the 11-year-old victim as Hanako Kuribayashi and the male victim as Satoshi Oyama, a parent to a Caritas Elementary School student.

“My heart is broken with pain when I think of the innocent children and their parents who send their children to our school with love who were victimized by this savage act,” Tetsuro Saito, the head of the school, said following the attack. “I’m struggling to fight back my anger.”

Mainichi‘s police sources said they have not released a motive because the attack appears to have been random. Neither newspaper mentioned the Catholic identity of the school as potential fodder to make it a target. Christian populations and institutions tend to become higher-profile targets for mass killing during the current Muslim holy month of Ramadan, as jihadists consider it especially rewarding to kill unbelievers during that time. Japan has an extremely small Muslim population, however, and no known history of jihadist attacks.

Murder sprees are not unprecedented, however. As the Mainichi noted on Tuesday, a similar elementary school knife attack occurred in 2001, when Mamoru Takuma, a man diagnosed with schizophrenia, attacked a school in Osaka, killing eight students and wounding 15. Takuma had reportedly taken ten times his regular dosage of medicine before the attack and unsuccessfully attempted suicide on several occasions before the killings.

Another knife attack left 19 dead in Sagamihara, west of Tokyo, in 2016. On that occasion, 26-year-old Satoshi Uematsu targeted a school for the disabled where he had worked prior to the attack.

“I will undertake the mass murder of heavily disabled people at any time if I receive an order from the central government,” Uematsu told coworkers before being removed from his position and placed in a mental health facility.

Nursing homes have attracted similar crimes. Former nursing home worker Hayato Imai was sentenced in 2018 with the killing of three elderly residents – ages 86, 87, and 96 –by pushing them off a balcony to make it appear to have been an accident. A similar case in 2018 resulted in the deaths of as many as 20 people, also elderly residents of a nursing home. Ayumi Kuboki told police she was engaging in the non-consensual euthanasia of terminally ill people by putting poison into their medicine.

Japanese Prime Minister Abe Shinzo announced following Tuesday’s attack he would order his cabinet to implement more protective measures for children at schools, building upon the measures taken following the 2001 Osaka attack. The attack occurred on the last day that U.S. President Donald Trump will be in Japan for a state visit; Abe was hosting Trump at the time.

“It was an extremely harrowing incident in which many small children were victimized, and I feel strong resentment … I will take all possible measures to protect the safety of children,” Abe said. “We must keep our children safe at all costs.”

“On behalf of the First Lady and myself, I want to take a moment to send our prayers and sympathy to the victims of the stabbing attack this morning in Tokyo,” Trump said in response. “All Americans stand with the people of Japan and grieve the victims and for their families.”