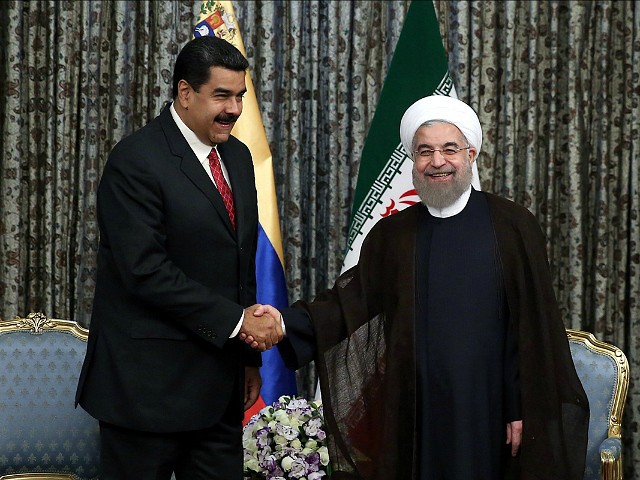 As the political and economic situation in Venezuela continues spiraling downward, domestic and foreign players await a final outcome, both moving to influence it.

President Nicolás Maduro, who took office upon the death of Hugo Chávez in 2013, continued along the socialist path set by his predecessor, turning the country into an economic basket case. In a May 2018 sham election that would have made the late Saddam Hussein proud, despite the country’s social and economic turmoil, Maduro purportedly won a second six-year term with 68 percent of the vote — beating his nearest competitor by 40 points. The turnout, at 32.2 percent, was the lowest in Venezuela’s history. Critics immediately vowed it would be the last election Maduro stole. The outcome of current tensions will determine how that vow plays out.

A little-known name, either in or outside the country until recently, is Juan Guaidó, leader of the opposition party and head of the parliament it controls. He has triggered a popular movement to restore democracy.

Despite an authoritative Maduro illegally stripping the legislative body of its powers in 2017, it continued to meet. Its authority therefore still is recognized by most nations. As Venezuela’s constitution allows the parliamentary head to become president whenever a “vacuum of power” exists, Guaidó asserted the same based on Maduro’s sham election. On January 23rd, Guaidó declared himself interim president, requiring he call a new election within 30 days. While his presidency was immediately recognized by the U.S., Canada, and others, Maduro still occupies the office.

In the Maduro/Guaidó presidential power standoff, the military’s support will ultimately determine the outcome. While the military’s leaders claim it supports Maduro, it is voiced by corrupt senior officials who have received bonuses and positions of power in nationalized industries from Maduro. A wave of discontent exists among lower-level troops who, along with their families, suffer under the weight of a failed state. Sky-rocketing inflation coupled with limited food supplies have made daily survival a struggle. People have resorted to eating pets. A National Guard rebellion supporting Guaidó was quickly put down by Maduro.

To placate the masses this month, Maduro announced a 300 percent increase in the minimum wage — raising it to the equivalent of six dollars per month!

Maduro has already been the target of a high-tech assassination attempt, according to his government. Last August, two drones armed with explosives detonated as he spoke at an outdoor military event.

As compelling as the intrigue inside the country is, so too is it among foreign players. While a return to democracy lies in the best interests of the people of Venezuela and the West, four authoritarian countries with influence there would lose out should Guaidó prevail.

Venezuela has been a benefactor of China’s financial diplomacy largesse. Starting under Chávez in 1999, it allowed him to fund his “Bolivarian revolution” and the country’s turn to socialism. Ever since, Maduro and his allies have enjoyed a lifestyle to which they feel entitled. But corruption has now left the country under a mountain of debt. Venezuela’s once-rich oil industry is in financial shambles as oil prices have dropped 50 percent.

China’s financial assistance was not motivated by humanitarian concern but by a desire to help Caracas diversify its oil customer base away from its primary buyer: the U.S. Despite declining oil prices, China announced a $20 billion investment package with Venezuela in 2015, which was to be spread out over the next decade.

Russia too has been a big investor in Venezuela motivated, just like China, to extend influence into the Western hemisphere. Moscow began major investments in 2013 — a $13 billion deal in the oil sector over a five-year period — and another $500 million in 2016. As early as 2008, Russia began sending warships and military aircraft on visits to Venezuela, symbolically poking the U.S. in the eye by such actions. Further, evidencing Hillary Clinton’s failed “reset” relationship with Russia, Moscow now warns the U.S. to steer clear of Venezuela.

Cuba is another interested player. Ever since the collapse of the Soviet Union, Cuba turned to Venezuela as a subsidized oil provider. The Castro brothers became stalwart supporters of Chávez and then Maduro. In exchange, Cuba sent skilled laborers there, along with experts to train its military and security forces — the latter implementing Cuban-style controls. Even to this day, Cubans are intimately involved in Venezuela’s “defense and communications systems to the point they would know how to how to run both in a crisis.” Cuba remains virtually Maduro’s only ally in the region.

The biggest loser should Maduro’s reign end is Iran. Decades ago, the mullahs developed a very close relationship with Chávez that enabled them to circumvent U.S. sanctions, to introduce its terrorist proxy Hezbollah into the region, to push the drug trade at the highest levels of government (the U.S. Treasury Department designated former Venezuelan Vice President Tareck El Aissami a “drug kingpin”), to sell Venezuelan passports and identity papers to Middle Easterners, etc. The end result is today we have in Venezuela “a rabidly anti-American failed state that appears to be incubating the convergence of narco-trafficking and jihadism in America’s own backyard.”

Venezuela’s cover for Hezbollah drug-trafficking has nurtured a close relationship with Mexican cartels — the latter helping the former access the U.S. border. Hezbollah’s influence is obvious from Farsi tattoos found on many traffickers.

Iran has denounced Guaidó’s claim to the presidency as a “coup.”

Maduro initially ordered U.S. diplomats to leave, later rescinding the demand after U.S. Secretary of State Mike Pompeo made clear the U.S. position in no uncertain terms. Pompeo warned, “President Trump and I fully expect that our diplomats will continue to receive protections under the Vienna Convention. Do not test the United States on our resolve to protect our people.”

U.S. support for Guaidó is critical if the Venezuelan people are to reclaim a democracy lost, hoping once again to hear the bells of freedom ring.