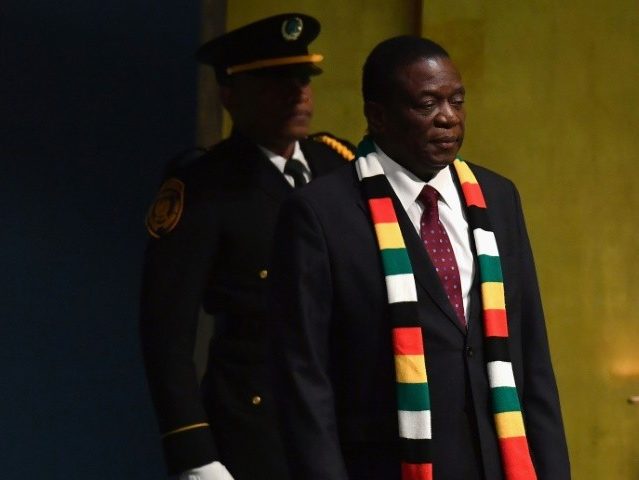 Zimbabwe’s President Emmerson Mnangagwa announced on Wednesday that, following an audit of how the nation’s agricultural lands were being used, the nation would proceed with seizing property from wealthy members of the ruling Zanu-PF party deemed to own too much of it.

Dictator Robert Mugabe launched a nationwide campaign to eradicate white farmers from the country in 2000, seizing most of their land, largely through violent assaults, to allegedly distribute more fairly among the nation’s majority black population. Zimbabwe’s economy, largely based on its agricultural industry, fell into hyperinflation and poverty. Between 2000 and 2015, Zimbabwe saw a $12 billion drop in agriculture production, in part because many of the individuals gifted the stolen land had no history or knowledge of how to keep the land fertile. A 2010 study found that 40 percent of the stolen land fell into the hands of either Mugabe himself or his political allies.

On Wednesday, Mnangagwa – one of Mugabe’s closest cronies as vice president until a dispute with wife Grace Mugabe led him to flee the country and return leader of a bloodless coup – announced that he would soon change this, even as a member of Mugabe’s Zanu-PF party. Mnangagwa made the announcement while debuting the results of an audit on land usage in the country, according to the newspaper New Zimbabwe.

“The land reform program is done and dusted,” he announced. “As government, we have embarked on a land commission audit. The audit has unearthed that most of the bigwigs have more than one farm.”

“As government, we are going to address the anomaly. We are going to repossess those farms and redistribute them. We are going to downsize on some of the farms,” he promised, refusing the name those slated to lose their property but identifying them as “very influential.”

Mnangagwa launched the farmland audit in November to enforce the one-farm-per-person rule and seize land from wealthy black families who avoided violating the rule by legally granting the land to underaged children in their family but using it themselves. The audit was once also part of a plan allegedly intended to compensate the white farmers who survived the sieges of the 2000s for their land, though as recently as last week, senior Mnangagwa officials said the country was not in an economic position to offer compensation to the white farmers displaced. Finance Minister Mthuli Ncube told reporters that the government is attempting to lure foreign investment to the country intended to, in part, compensate the farmers affected.

“Whilst work on the extent of government’s obligations is still to be finalised, the resources required to compensate and put closure to this important issue is obviously beyond the capacity of the budget to finance,” Ncube explained. The estimates of debt owed to the white farmers reach as high as $9 billion total.

Mnangagwa did not address compensation on Wednesday, merely enforcing the law as it exists regarding farm ownership. He made clear that he would go after senior members of his own party.

“The preliminary reports have shown us that most senior officials within the party (Zanu PF) have more than one farm,” he noted. Zimbabwe has a nominal rule that each wealthy person should own only one farm, one that Mugabe himself violated for years. New Zimbabwe states that Mugabe is believed to own as many as 13 farms; others have put the number as high as 21 estates. As Mnangagwa did not name any of the targets of the new seizures, it is unclear whether Mugabe himself would lose farmland in the new actions.

Mnangagwa had previously addressed the issue of Mugabe’s riches, stating in August that he could not move against Mugabe until the process of fully verifying his assets was complete. At the time, he stated he would use the government to seize all but one property from Mugabe to abide by the law.

Zimbabwe’s agricultural industry accounts for most of the nation’s jobs and a large percentage of its GDP. The 2000 land reforms devastated the industry because so many farms went into the hands of individuals with no farming experience or interest in cultivating the land.

“The root cause of our current economic crisis is lack of production because we are not making full use of the farms. Zimbabwe’s economy is agro-based and we need a new strategy to get the most out of the farms,” economist Midway Bhunu told South Africa’s Business Live. The result has been that Zimbabwe has to use the little profits it makes from its farms to import food that, under proper management, it could grow domestically.

Lands and Agriculture Minister Perence Shiri revealed less than a week ago that, as part of a separate report released, the government believes that 1.83 million hectares of arable land in Zimbabwe currently stands unused.

“Major challenges facing the agriculture sector include low levels of irrigation. The country has potential to irrigate up to two million hectares but currently, only 170 000 hectares is under functional, leaving a balance of 1.83 million irrigable hectares grossly underutilized,” Shiri explained.