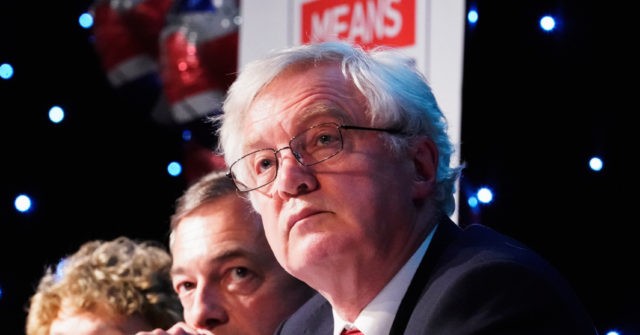 A speech by former Cabinet minister and Tory leadership contender David Davis MP against vaccine passports has been wiped from YouTube for “contradict[ing] expert consensus”.

The leading British politician, who served as Britain’s inaugural Secretary of State for Brexit, made the speech — still available on Facebook, at least for now — at a Big Brother Watch fringe event at the recent party conference in Manchester, promoting vaccination but warning against vaccine passports as “illiberal, demanding that we an ordinary British citizen produce our papers to do something which is normal in our daily lives.”

However, Big Brother Watch, a civil liberties pressure group with a focus on resisting government overreach, reports that the speech has now been erased from the world’s biggest video sharing platform for “medical misinformation”.

Big Brother Watch says that the tech giant “did not specify what content had breached the rules”, but that it received a notification explaining that  “YouTube doesn’t allow claims about COVID-19 vaccinations that contradict expert consensus from local health authorities or the World Health Organization (WHO).”

“This is an outrageous attack on free speech,” said Davis, 72, in a statement shared on the Big Brother Watch website.

“Throughout the pandemic, we have seen blatant attempts by Big Tech to silence opposition voices challenging the conventional wisdom. This episode serves as a further example of the worrying trend of strangling free speech,” the MP continued.

“My speech at conference was carefully researched, wholly accurate and backed up with the latest scientific evidence,” he insisted.

However, far from moving to tackle censorship by Big Tech, as the Polish government has been attempting, Davis lamented that his own party is only further eroding free speech in Britain — already something of a paper right, which thousands of people arrested or harassed by the police for the views they express.

“This Government will shortly be bringing forward the Online Safety Bill. This harmful piece of legislation is nothing but a censor’s charter that only hands more power to these unaccountable Silicon Valley giants,” Davis warned.

“The unambiguous attempt by YouTube to censor my speech is a warning. If YouTube is happy to attempt to silence elected Members of Parliament, then they are also happy to censor anyone uploading content to their services.

“The Government must stop the erosion of free speech online. That starts with looking again at the wholly inadequate proposals in the Online Safety Bill,” he concluded.

David Davis MP says YouTube’s decision to remove a video in which he criticises vaccine passports is “outrageous”.

“It’s the first time in Britain I have had my speech censored. It’s why we shouldn’t let Google, YouTube or Facebook censor our speech.”@JuliaHB1 | @DavidDavisMP pic.twitter.com/7gvcexMqDr