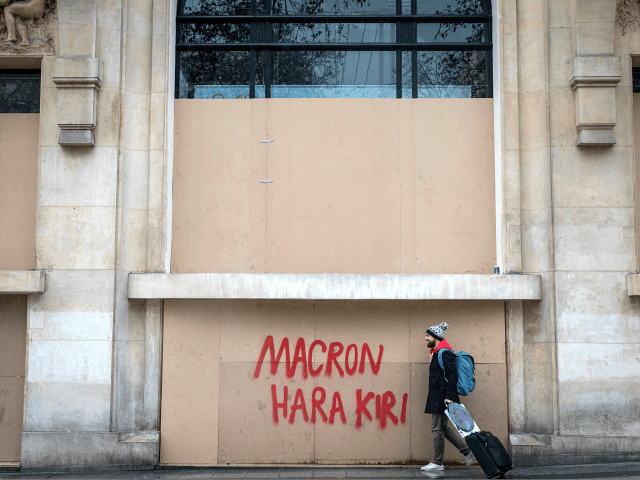 PARIS (AP) – The Latest on the unrest in France (all times local):

Paris’ chief prosecutor says that nearly 1,000 people, nearly 100 of them minors and most without police records, are being held in custody after weekend protests in the French capital that turned violent.

Remy Heitz also said at a news conference on Sunday that the prosecutor’s office was seeking preliminary charges against who they believe is the main person responsible for graffiti scrawled on the Arc de Triomphe last weekend. Thirteen others were already handed preliminary charges over vandalism of the monument.

Heitz said that most of those in custody were men under 40 from various regions who came to Paris for the fourth Saturday of protests by a ballooning grassroots movement angry about a fuel tax hike and other issues.

An official says that French President Emmanuel Macron plans to bring together national and local officials on Monday to hear their proposals in this “grave moment the nation is traversing.”

The Elysee Palace official said on Sunday that the goal is to mobilize into action the panoply of officials representing political, economic and social forces of France in a bid to unwind a spiral of protests. The official wasn’t authorized to speak publicly and spoke on condition of anonymity.

Macron is expected to address the nation early in the week, breaking a silence that has fed the fury of the grassroots movement, which has expanded and radicalized.

New violence hit Paris and a handful of other cities in the fourth Saturday protest by the protesters dubbed yellow vests for the bright safety vests they often wear.

France’s Interior Ministry says 1,220 people were taken into custody around France during the latest yellow vest protests – a roundup the scale of which the country hasn’t seen in years.

Police frisked protesters Saturday at train stations around the country, confiscating everything from heavy metal petanque balls to tennis rackets – anything that could remotely be used as a weapon.

The Eiffel Tower and Louvre Museum reopened Sunday after closing amid Saturday’s rioting. Shops assessed looting damage Sunday and cleared out broken glass, after shutting down on Saturday at the height of the holiday shopping season.

In the melee Saturday, protesters had ripped off the plywood protecting Parisian store windows and threw flares and other projectiles. French riot police repeatedly repelled them with tear gas and water cannon.