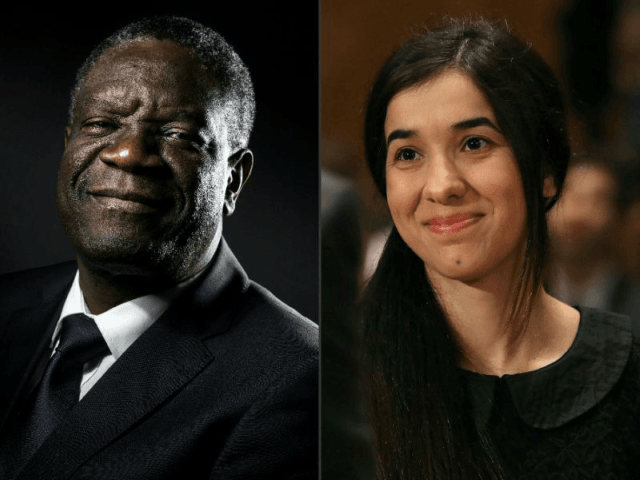 A Yazidi victim of the Islamic State and a Congolese doctor won the Nobel Peace Prize on Friday for their efforts to end the use of sexual violence as a weapon of war and armed conflict.

Gynecologist and surgeon Denis Mukwege won the prize for his work treating tens of thousands of women and girls affected by rape and sexual violence in the Democratic Republic of Congo, which has one of the worst human and women’s rights records in the world.

He lives under the permanent protection of U.N. peacekeepers at his hospital, mainly because of his calls to impose harsher sentences against those who use sexual violence weapon of war.

The 63-year-old, who has previously won awards such as the 2008 U.N. Human Rights Prize and 2009 African of the Year, told the Norweigan newspaper VG that he heard the news while he was in the operating room.

“I was in the operating room so when they started to make noise around [it] I wasn’t really thinking about what was going on, and suddenly some people came in and told me the news,” he said.

Nadia Murad, a Yazidi woman from the northern Iraqi town of Sinjar, was held for three months as a sex slave by the Islamic State. During that period, she was held bought and sold multiple times among traffickers and subjected to sustained sexual and physical abuse.

After successfully escaping from captivity in 2014, she became an international activist for the tragedy of the Yazidi people, who the U.N. has recognized as victims of genocide. She particularly focused on the plight of Yazidi women, many of whom were also held as sex slaves or victims of egregious crimes.

“Denis Mukwege is the helper who has devoted his life to defending these victims. Nadia Murad is the witness who tells of the abuses perpetrated against herself and others,” she continued. “Each of them in their own way has helped to give greater visibility to wartime sexual violence, so that the perpetrators can be held accountable for their actions.”

Some commentators predicted that President Donald Trump and South Korean leader Moon Jae-in may be recipients of the prize for their work on restoring peace to the Korean peninsula, despite the fact that North Korea has not yet agreed to denuclearize.

Critics believe the prize has lost credibility in recent years due to the questionable achievements of its recipients. Recent winners include Colombian President Juan Manuel Santos for forcing through a widely unpopular “peace deal” with the country’s communist guerillas, the European Union for supposedly preserving peace in Europe, and Barack Obama for becoming the first black American president.